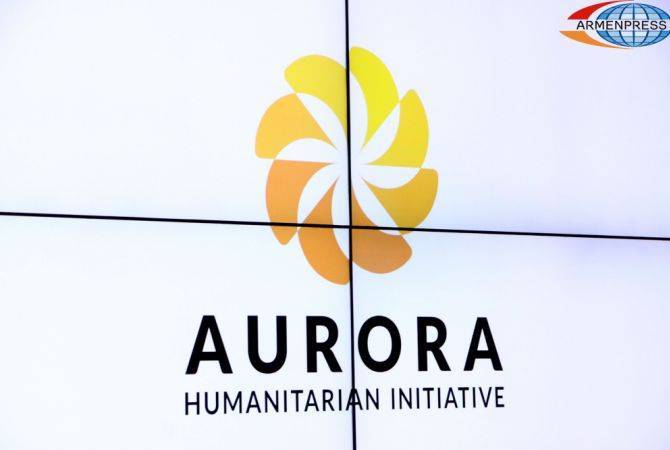 
YEREVAN, MAY 16, ARMENPRESS. As the world awaits the announcement of the 2019 Aurora Prize Laureate, nominations open for the 2020 Aurora Prize for Awakening Humanity, reports Armenpress.

This global annual award, launched by the Aurora Humanitarian Initiative, seeks to identify and support modern day heroes who do the difficult life-saving humanitarian work on the ground, in many dangerous places around the world. The Aurora Prize, granted on behalf of the survivors of the Armenian Genocide and in gratitude to their saviors, recognizes the importance of aiding people who demonstrate exceptional courage and commitment to help others and have a huge impact on the welfare of humankind. Since 2015, the Aurora Humanitarian Initiative has honored these outstanding people, empowering them and raising awareness of their selfless work.

Anyone can nominate. The Aurora Humanitarian Initiative seeks those courageous committed individuals who put their own life, health, freedom or reputation at risk to preserve human lives. Once the nominations are submitted online, they are reviewed by a panel of professionals and experts in the humanitarian field. The Aurora Humanitarians and the Prize Laureate are then chosen from the shortlisted nominees by the Aurora Prize Selection Committee comprised of Noble Prize Laureates, former high officials and global human rights activists. A more detailed description of the Aurora Prize criteria and selection process can be found on the Prize website.

Every year the Aurora Humanitarian Initiative grants a US $1,000,000 award to the Laureate who receives a unique opportunity to continue the cycle of giving by supporting the organizations that have inspired their humanitarian work.

Over the years, 14 Aurora Humanitarians have been shortlisted and 3 Laureates have been chosen, each of whom has nominated three organizations to receive support from Aurora. Through these organizations, the Aurora Humanitarian Initiative helps combats child poverty, advances aid for refugees and orphans and provides educational, psychological and medical support to victims of war and sexual violence and HIV/AIDs-affected children. This impact is driven by a range of initiatives funded by the Prize across the world, including microcredit programs, scholarships, primary, secondary and vocational education, provision of medical supplies, and more. Overall, the Aurora Prize has allocated $3.3 million to support 23 projects worldwide in 11 areas of humanitarian assistance.

Last year, the 2018 Aurora Prize was awarded to Mr. Kyaw Hla Aung, a lawyer and Rohingya Muslim leader who, despite a total of 12 years’ imprisonment for peaceful protests against discrimination and violence, continues to fight for equality, access to education and human rights for his community. The Aurora Prize award supports international organizations, chosen by Mr. Aung, that provide medical aid and assistance to refugees in Myanmar.

“The Armenian people went through the tragic experience a century ago, and now the Rohingya people encounter a similar disaster. More than 100 years after the Armenian Genocide, you are the ones who give hope and support to people in extreme need. The Aurora Humanitarian Initiative’s example should be viral for humanity because it is the only way to tackle humanitarian challenges and make the world a little more secure for human beings from all ethnic groups, races and religions,” said the 2018 Aurora Prize Laureate, Mr. Kyaw Hla Aung, who was the third Laureate since the establishment of the prize.

Nominations for the 2020 Aurora Prize open on May 16, 2019, the International Day of Living Together in Peace declared by the UN to uphold the desire to live and act together in order to build a sustainable world of peace, solidarity and harmony. Nominations will close on October 31, 2019.

The Aurora Prize for Awakening Humanity is a global humanitarian award established to recognize modern day heroes and the exceptional impact their actions have made on preserving human life and advancing humanitarian causes in the face of adversity. On behalf of the survivors of the Armenian Genocide and in gratitude to their saviors, an Aurora Prize Laureate is being honored each year between 2015 and 2023 (in remembrance of the eight years of the Armenian Genocide 1915-1923) with the unique US$1,000,000 award to continue the cycle of giving by supporting the organizations that inspired their work.

Further information is available at www.auroraprize.com