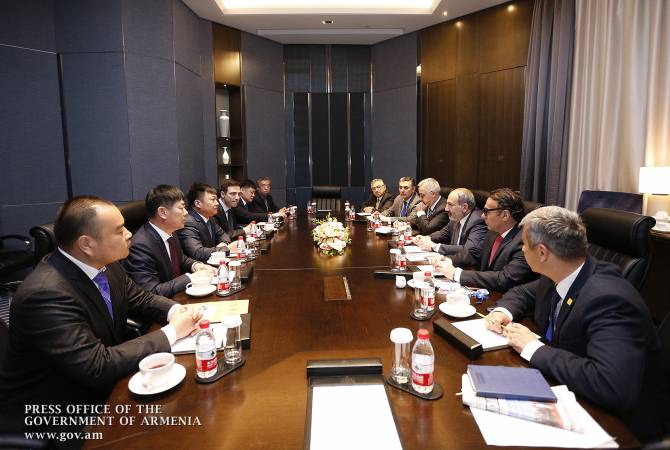 During the meeting the prospects and opportunities of implementing various investment programs in Armenia were discussed.

PM Pashinyan expressed satisfaction over the results of his working visit to China and stated that they must discuss in the future the actions which will contribute to boosting the bilateral economic ties. “I am very happy to discuss with you your interests and proposals. Today major changes are taking place in Armenia, systematic corruption and economic monopolies no longer exist in our country. Our actions are directed for creating equal conditions for the economic entities and making the business environment more attractive”, Nikol Pashinyan said, adding that taking into account the high level of political dialogue with China, favorable conditions have been created in Armenia for the Chinese investments.

In their turn the Ganergy Heavy Industry Group representatives introduced their activities and stated that they are interested in conducting an activity in Armenia’s industry, finance and investment areas.

The representatives of the company of Zheng Yi noted that they are ready to import Armenian brandy, wine, reprocessed agricultural goods to China, as well as make investments in Armenia by creating an industrial zone.

MZTL company leaders also expressed their readiness to establish a production of elevators in Armenia. For this purpose the company is ready to transport a small group of elevators to Armenia aimed at assessing their efficiency.

The PM proposes the company representatives to discuss the future cooperation steps with the responsible officials of the Armenian government, as well as the prospects of activities of the Chinese companies in the Meghri free economic zone. He said the Armenian government views the construction of North-South highway as a communication and transportation corridor and is happy that the Chinese government is interested in cooperation aimed at implementing this project.

At the end of his visit the Armenian PM gave interviews to the leading Chinese news agency Xinhua and CCTV.

Before leaving for Yerevan Pashinyan also visited the Armenian Embassy in China.

The Armenian PM’s working visit to China is over.