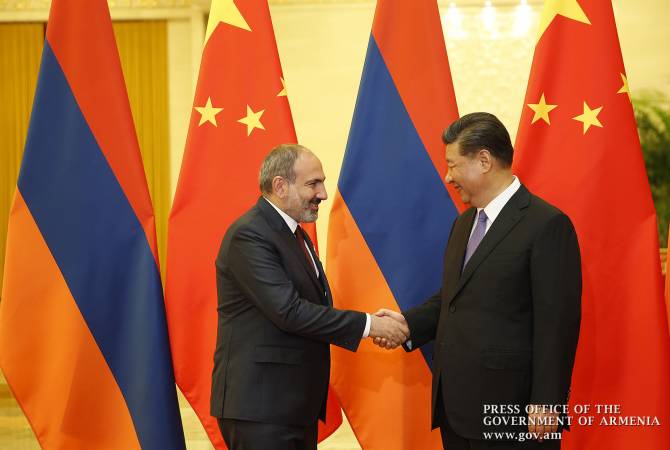 
YEREVAN, MAY 16, ARMENPRESS. The working visit of Armenian Prime Minister Nikol Pashinyan to China is over, Armenpress correspondent reports from Beijing.

On the last day of his working visit PM Pashinyan met with the Ganergy Heavy Industry Group representatives.

The Armenian PM also gave an interview to the CCTV news agency.

Pashinyan and his delegation arrived in China on May 14.

The PM met with Chinese President Xi Jinping. During the meeting Pashinyan said Armenia is interested in implementing joint programs with China within the frames of the One Belt, One Road initiative and added that the Armenian side considers participation in it via the implementation of joint programs in transportation, railway, information infrastructure areas. In his turn President Xi Jinping said China is ready to participate in the construction of North-South highway and implementation of other infrastructural projects. He expressed confidence that the bilateral cooperation will further develop in trade turnover, industry, transportation, cultural and humanitarian sectors.

The Armenian PM also met with his Chinese counterpart Li Keqiang. “We can closely cooperate in a wide range of areas, given the similarities between our two countries: there is a strong political groundwork for this”, the Chinese PM said. In his turn Nikol Pashinyan said Armenia and China have common interests. He made a point of cooperation in the fields of industry, transport and information technology.

The Armenian PM also attended the Conference on Dialogue of Asian Civilizations in Beijing where he delivered remarks.

The PM and his spouse Anna Hakobyan attended a gala concert held on the sidelines of the Dialogue of Asian Civilizations conference at the National Olympic Stadium in Beijing. The Armenian “Friendship” State Dance Ensemble performed during the gala concert.