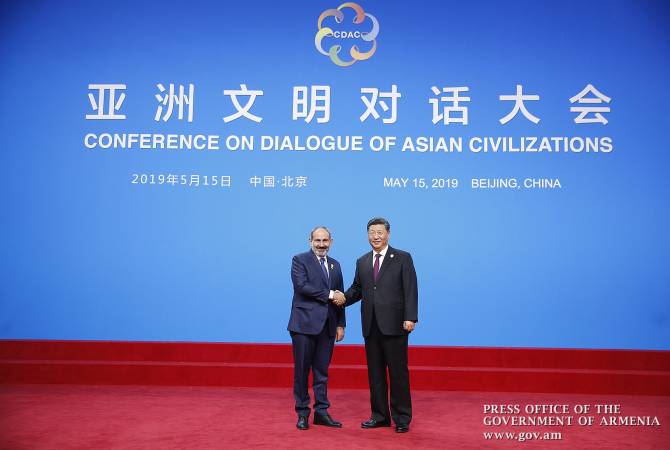 
BEIJING, MAY 15, ARMENPRESS. The opening ceremony of the Conference on Dialogue of Asian Civilizations was held in the Chinese capital of Beijing on May 15.

The Conference is attended by Armenian Prime Minister Nikol Pashinyan and his delegation, Armenpress correspondent reports from Beijing.

Leaders of over 40 countries, high-ranking officials are participating in the Conference.

President of China Xi Jinping, as well as Presidents of Singapore, Sri Lanka, Greece and King of Cambodia are attending the event.

In his remarks the Armenian PM said it’s a great honor to be in China, the cradle of ancient civilizations.

“Historically, Armenians in Armenia and the Diaspora have had a vision which was always open to cooperation with different cultures, traditions and religions. As great German philosopher Immanuel Kant once said: “Among the Christian nations Armenians have a concrete trading spirit, passing from the borders of China to the shores of Guinea for trade… and they know how to get a peaceful hospitality from the peoples they meet”. This is the reason that today we can meet Armenian cultural heritage sites in Jerusalem and Istanbul, Tbilisi and Baku, Honk Kong and Calcutta, Singapore and Dhaka, in other words in all major settlements spread on the great Silk road”, the PM said.

He added that the philosophy that is based on today’s Conference is in full accordance with the values adopted by Armenians.

He also noted that this year the 70th anniversary of the foundation of the People’s Republic of China is being celebrated. “I would like to extend our warm congratulations to President Xi Jinping and the Chinese people on this historic anniversary. China welcomes this key event of its history with numerous achievements: an impressive economic development, social and cultural progress”, he said.

Pashinyan also talked about the recent fundamental changes that have taken place in Armenia which launched in the pan-national movement, reflecting the Armenian people’s dedicated aspiration to build better future for the current and future generations. “We managed to eliminate the systematic corruption and oligarchic economy, strengthen the independent judiciary and create equal opportunities for all economic entities. Our main goal is to build competitive, technologically developed economy and modern society based on the universal principles of equality, justice and rule of law. Today Armenia is a dynamically developing country with stable governance, has a vital economy and modern society where pluralism exists”, Pashinyan said.

At the same time, the PM noted that Armenia is a country with millennia history. He added that Armenia reached its highest cultural achievements only when it had uninterrupted communication and contacts with other cultures and traditions. “Therefore, today, like in the past, we see our progress path in the cooperation with all regional and global players. We oppose dividing lines, artificial barriers and closed borders, which, perhaps are absurd in the 21st century, but still are maintained by our neighbours by creating security challenges and economic obstacles”, the Armenian PM said.

Pashinyan added that Armenia is engaged in bilateral and multilateral cooperation processes which cover a broader region, be that the economic integration with the countries of the Eurasian Economic Union (EAEU), where Armenia is one of the founding members, or the mutual rapprochement within the frames of the EU’s Eastern partnership, or the participation in  the Silk Road Economic Zone initiative which Armenia joined in 2015.

Armenian Prime Minister Nikol Pashinyan is in China on a working visit.