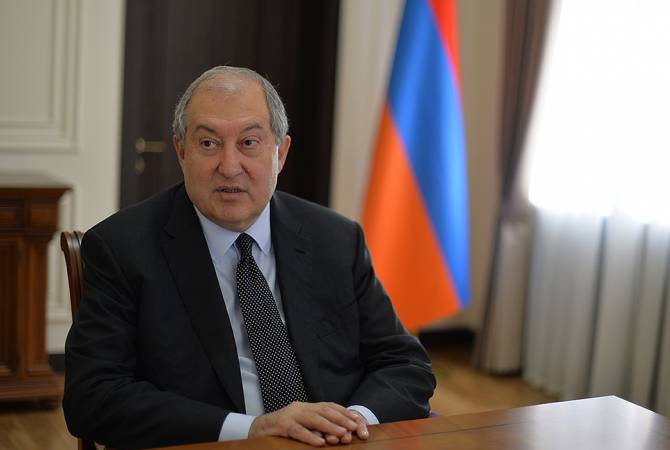 
YEREVAN, MAY 14, ARMENPRESS. The relations between Armenia and Russia are a lasting value which cannot change with the time, President of Armenia Armen Sarkissian said in an interview to the Russian Zvezda TV, talking about the Armenian-Russian relations, as well as Armenia’s development prospects.

-Mr. President, how do you assess the Armenian-Russian relations, what are the development prospects in your opinion?

-I have assessed, continue assessing and will assess these relations as constant. They are constant, never change because historically we are brothers and friends. Friends of weapons. Friends of fate. Friends of belief. I assess the relations as a lasting value which cannot change with the time. They are part of our culture, history, philosophy, past, present and future.

-What are Armenia’s prospects today? How do you assess that?

-The answer is: the country has a huge potential, I see a great development potential. And for several reasons. I can share one or two of them with you. We can state that the Armenian people are capable to re-born after any major difficulty, even the great tragedy – the 1915 genocide. After the spread of Armenians around the world the country was reborn as Pyunik and is looking forward. Always forward.

Of course, difficulties also emerge on this path, but I think that we are a people who manage to overcome difficulties, both independently and with friends. And Russia is our friend. I think we can have many advantages in the 21st century, because Armenia perhaps is a small, but a global nation. A lot of Armenians live in Russia, some of them are citizens of Russia. I really want to believe that they are good citizens, because they first all must be good citizens of Russia, and of course, never forget about their historical roots and culture.

There are also a lot of Armenians in the US, both in south and north, in Europe and the Far East. They are everywhere. This is a great power. The 21st century belongs to the people who have ties around the world. This is the century of the people who know how to overcome the difficulties. It’s the century of the people who are able to fight for themselves and their friends. Therefore, I think a bright future is expected. You could not expect another answer from the President.

-Earlier it was stated that Armenia needs foreign investments. Is the Russian business ready for investments? If yes, in which areas?

-I don’t think that I must comment on the opinion of the Russian business. What I can comment is the following: the Russian business is in Armenia for many years and operates in a well-grounded way. There are investments from different countries, both from Europe, Far East, Middle East and America. But the Russian business has always been here, and we sometimes even didn’t notice that, it seemed that business was domestic. Moreover, not only the pure Russian companies made investments in Armenia, but also those Russian companies which include ethnic Armenians in their staffs. These are great investments, and I think, they will not be less in the future as well.

-According to some reports, you plan to visit Moscow soon. In general, how often do you visit Russia and what first of all would you like to see in our country?

-I have no official visit yet in the future, but I visit Moscow quite often. I don’t think that Moscow and St. Petersburg are the cities where I would like to visit to see something, because from early childhood, when I visited St. Petersburg and Moscow for the first time with my father, I know the cities quite well. Later I was already a student. In addition, there is a concrete history in our family linked with Russia, it comes from our ancestors, grandfather and ends with my sons.

That’s why I visit Moscow and Russia in general and feel like in my home. As for what I would like to see during each visit…Perhaps, a good concert. I like everything. Classic music. During my last visit to Moscow together with my spouse, we visited the Great Theater to watch “Anna Karenina” great performance. This performance was absolutely unexpected both for me and my wife. And I would like to see much more exhibitions of Pushkin Museum and Tretyakov Gallery in Yerevan.