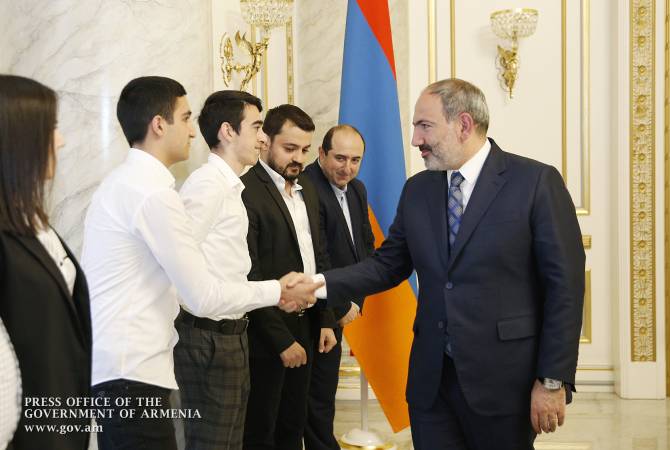 
YEREVAN, APRIL 26, ARMENPRESS. Prime Minister of Armenia Nikol Pashinyan received the members of the Armenian Eagles chess team, who have qualified for the finals of the Pro Chess League 2019 chess tournament. The final round will be held in San Francisco on May 4 and 5.

As ARMENPRESS was informed from the Office of the Prime Minister of Armenia, the captain of the Armenian team, MP Artak Manukyan introduced to Prime Minister Pashinyan the members of his team - Zaven Andriasyan, Hayk Martirosyan, Gor Vardanyan, Shant Sargsyan and Anna Sargsyan and presented their past achievements. He noted that the team won the prestigious tournament in 2018, which is a great honor and responsibility. They have reached the final round and are firmly determined to win it this year, too.

Enthusiastic about the achievements of the Armenian Eagles, Nikol Pashinyan wished them every success in the upcoming finals. The team members thanked the Prime Minister for kind remarks and support ahead of the final round.

The Premier and the team members exchanged views on the ways of promoting chess in Armenia, positioning Armenia as a chess superpower, increasing the country’s tourist attractiveness. Reference was made to the Armenian Chessify mobile application, the teaching of chess in Armenia’s schools and other issues of topical interest.