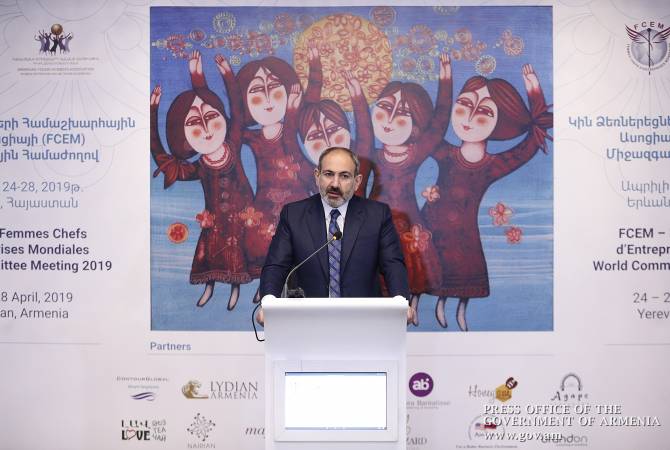 
YEREVAN, APRIL 26, ARMENPRESS. Prime Minister of Armenia Nikol Pashinyan attended the opening of the international conference of the World Association of Women Entrepreneurs (FCEM). The conference is hosted by the Armenian Young Women’s Association and Armenia’s Female Entrepreneurs Network.

As ARMENPRESS was informed from the Office of the Prime Minister of Armenia, PM Pashinyan delivered a speech, in which he stated, in part:

I am glad to greet you on the occasion of today’s conference dedicated to women’s entrepreneurship. The larger part of the population in the Republic of Armenia consists of women, and women are about half the economically active population in our country. This is especially true to be stated at this conference because it would be hard to imagine that the proposed economic revolution may succeed in Armenia if we are not able to boost women’s entrepreneurship.

Let me say that over the past year women’s role and the level of women’s activity have considerably increased in the Republic of Armenia. And let me also say that the non-violent velvet revolution that took place last year in Armenia would not be a reality without such a large-scale participation of women. For me, this was the first sign that our women’s overwhelming involvement in revolutionary processes and mass events last year was the first and indisputable proof that a revolution had really started in Armenia, and women were to play a key role in our revolution. I am hopeful and convinced that women will play a central role in the proposed economic revolution as well.

Many spheres ranging from public administration to business management actually need to be attended by women in our country. This means that we need to promote women’s involvement in all spheres without exception, and this is a priority for our government. I have voiced this idea as a candidate for prime minister in the National Assembly in May, 2018. At the same time, I have reaffirmed my conviction that women’s activity in economy, politics, public life, public administration is not at odds and should not contradict our perception of a traditional family. Today we have such prominent examples that substantiate our position.

I would like to urge all Armenian women to join our drive for economic revolution as I am convinced that female entrepreneurs can be more productive, more balanced, more responsible and well-grounded because I am convinced that the Armenian woman’s sense of responsibility is a little bit higher than what we can see among men. I also believe that women are statistically less prone to corruption. That is my firm belief. I am likewise convinced that women’s involvement in the economy and in politics will gradually increase in the near future. But today I want to talk about business and entrepreneurship. I hope women will take the lead and will be instrumental in bringing about an economic revolution in Armenia. This is a very important issue.

An event dedicated to the World Intellectual Property Day was being held on the second floor a few hours ago. It is crucial for any business undertaking to be supported by a specific idea. This is extremely important, because any business activity first of all implies intellectual activity and it is impossible to do anything without thinking. This is especially important in today’s Armenia, in the 21st century, since each one of us must clearly state that we are responsible for our decisions and steps and we should be able to reap the fruits of our work.
We say it is a priority for our government to encourage economic activity and especially among women. And in this context, I want to emphasize once again that there should be a specific idea at the heart of any economic activity: extraordinary, amazing ideas that can lead the edge in the modern world. This is the greatest guarantee of success - be it politics, economy, creativity, everything. Everything should be tried to put an idea that will make the given business owner and company different from others and make it more noticeable to others.

I am convinced that we will have increasingly more such ideas in Armenia. We can see such ideas today. For example, it seems that everything is well thought out, but people may think of creating a new type of tea and be successful in the Republic of Armenia. It seems that tea has been invented long ago and has existed for several millennia.

The other day, I voiced a strange idea, which can be the subject of heated discussions. I said that the expression “we do not need to invent a bike” was harmful because it might dissuade people from acting and inventing. If the phone’s inventor had been guided by the “no need to create a phone” logic, the telephone would not have been be created.

Therefore, I would call on all Armenian women not to be afraid of inventing a bicycle. Please dare and take your step, and you will definitely be the winner. Your victory is that of the Republic of Armenia, the Armenian nation and humanity, in general.”

The World Association of Women Entrepreneurs is an association of business women from all over the world, founded in 1945 in the wake of World War II. It brings together more than 5 million business women in 120 countries across 5 continents. It has advisory status in the UN, the Council of Europe, the International Labor Organization and the European Parliament. The incumbent President of the FCEM is Marie-Christine Oghly.The Armenian Young Women’s Association has been a full member of the World Association of Women Entrepreneurs since 2014.