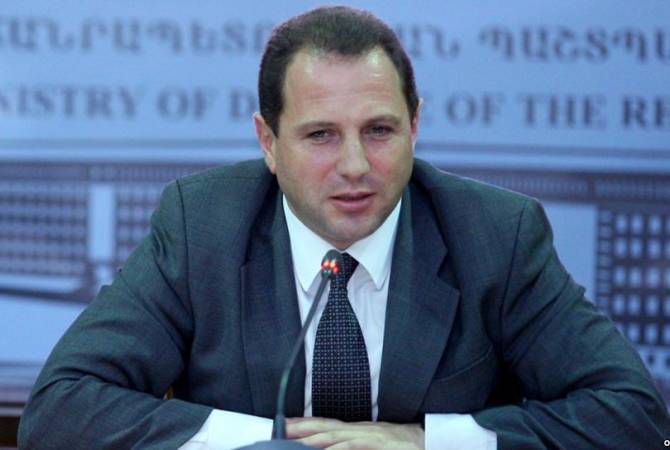 
YEREVAN, APRIL 25, ARMENPRESS. The Republic of Armenia intends to continue to make its feasible contribution to the UN-sanctioned peacekeeping undertakings of various formats, carried out in various geographic, climatic, ethnic and confessional operational environments. To this end, we are ready to use all the potential that we have, and above all, the field hospital and specialists in the fight against improvised explosive devices, as ARMENPRESS was informed from the press service of the Defense Ministry of Armenia, Minister Davit Tonoyan said on April 25, giving speech at the 8th Moscow International Security Conference. His speech was headlined “International peacekeeping: new approaches and military cooperation”.

First of all, I would like to thank the Ministry of Defence of the Russian Federation and personally the minister of defence, Army General Sergey Kuzhugetovich Shoigu, for the invitation to take part in the work of this traditional Moscow Conference on International Security. The discussion of the most pressing global and regional problems and issues, exchange of views on the formation of international security is extremely important in the context of increasing the level of predictability in international relations.

The topic of today's plenary session is a logical continuation and further development of the last year’s discussion of approaches to solving global and regional problems, as well as the initiative of the UN Secretary General to increase participation in UN peacekeeping operations, the so-called A4P.

We all note with great concern the growing escalation of tension in international relations, the degradation of security mechanisms, the noticeable expansion of conflict zones as a result of aggravating intra-state crises, primarily on ethnic and religious grounds.

At the same time, our world has become more interconnected: any instability in a particular region may trigger negative consequences throughout the world. In such a situation, the division of threats to peace and stability into regions is very conditional.

The above circumstances prompt the entire international community to set tasks of dynamic development and create prerequisites for revising the approaches and criteria for peacekeeping activities, which in their current form, as was presented in the Declaration on Joint Commitments to UN Peacekeeping Operations, in view of the radical changes that have occurred the field of crisis management is noticeably outdated. The foregoing assumes the resumption of discourse on the legitimacy of the mission, interaction with partners in the mission, as well as the composition of international forces and the rules of their involvement or reconciliation.

The task of interaction between various partners or, at least, the interested parties on the mission is equally important. In this context, particular importance is attached to the factor of establishing cooperation or coordination between various actors, which is one of the key conditions for the successful implementation and completion of any peacekeeping activities.

Finally, the peacekeeping forces should have a rationalized mandate and composition and be prepared for any development of events, acting solely within the international humanitarian law and the tasks and obligations assigned to them. Moreover, today, traditional peacemaking more and more corresponds to multidimensional, when instead of purely military tasks, diverse tasks are put in the center, the military contingent gives way to mixed military-police-civilian personnel, and the indirect role of peacekeeping forces in political processes is replaced by the most direct involvement.

In view of the above, I believe that the main trends in the development of international peacekeeping forces should be:

The concurrence of interests and goals in ensuring international security dictates the continuous development of their individual and collective potentials to maintain peace and stability, both by world and regional powers, and by countries with limited military capabilities. Armenia also adheres to this approach. For more than two decades, being in an unstable and unpredictable security situation, when the concepts of “war and peace” are very shaky, Armenia, moving forward with the consistent development of defense capabilities, has been developing national capabilities for maintaining peace and international security.

Armenia, as a country that has felt the price of international security and stability in practice, has accumulated considerable experience in the field of peacekeeping over the past 15 years, the acquisition of which began in Kosovo and Iraq. Currently, Armenian peacekeeping forces are represented in four international missions.

We also demonstrated a consistent commitment to helping to ensure positive changes in the regions affected by the full-blown crisis, which was reflected in our recently launched National Humanitarian Mission in Syria, the decision on which was taken in accordance with the official request of the host country - the Syrian government, and the request by the Armenian community of Aleppo and their religious leaders, with the assistance of the Russian Ministry of Defence, for which we are very grateful to the Russian Government. In particular, the deployment of the Armenian humanitarian contingent in this region is justified by the historical factor of the Armenian presence in the Middle East from time immemorial and the desire to preserve our roots in the Middle East, taking into account the bitter experience of the past ten years of instability, resulting in a massive exodus of Armenians from Iraq.

The humanitarian mission comprises medical personnel and demining specialists who, in cooperation with their Russian colleagues, provide assistance to the population of the Syrian Arab Republic affected by a long-lasting war.

The Republic of Armenia intends to continue to make its feasible contribution to the UN-sanctioned peacekeeping undertakings of various formats, carried out in various geographic, climatic, ethnic and confessional operational environments. To this end, we are ready to use all the potential that we have, and above all, the field hospital and specialists in the fight against improvised explosive devices.

In conclusion, I would like to assure that Armenia is a champion of the equivalent application of the norms of international law and the right to free choice, reasonable globalization and international security architecture based on abstaining from the policy of “force” and maximalist approaches, hate speech and belligerent statements.

As one of the leading experts on international relations said, “Trying to implement their idealistic and realistic goals in foreign policy, states should combine their power with moral principles, and temper their belief in their rightness”.

Thank you for your attention”.