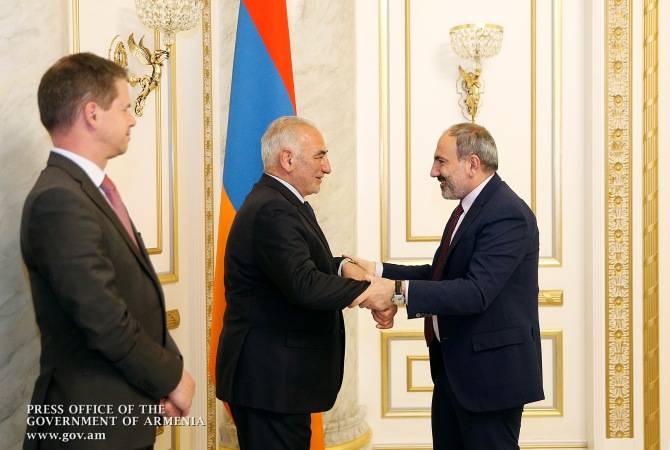 As ARMENPRESS was informed from the Office of the Prime Minister of Armenia, the PM welcomed the visit of Georges Képénékian to Armenia and highlighted its role for the development and strengthening of the Armenian-French relations.  Nikol Pashinyan highly assessed the activities of Georges Képénékian for the international recognition of the Armenian Genocide. “I want to address my words of appreciation to French President Emmanuel Macron who has declared April 24 Remembrance Day of Armenian Genocide victims. This emphasized the relations beween our peoples and countries in a specific way”, Nikol Pashinyan said.

Georges Képénékian said that he is enthusiastic over the developments in Armenia and added that today Armenia is a good example of positive changes. “A historical new page has opened in Armenia and today the country is perceived as a positive example of changes”, he said. The 1st Deputy Mayor of Lyon informed that he discussed ways for the development of the cooperation with Yerevan Mayor.

During the meeting the interlocutors touched upon the Armenian-French decentralized cooperation, as well as issues concerning Armenia-Diaspora relations.

Referring to the fire at Notre-Dame de Paris, PM Pashinyan expressed conviction that progressive humanity will unite for the restoration of the exceptional civilization masterpiece.