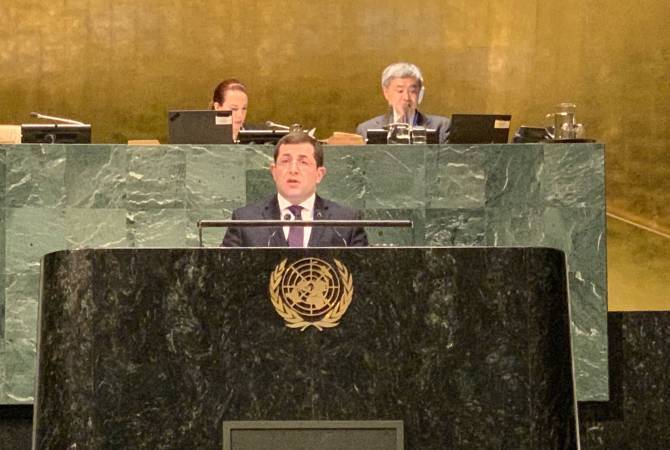 
YEREVAN, APRIL 25, ARMENPRESS. Armenia's Permanent Representative to the UN participated in the High Level Plenary Meeting of the General Assembly on International Day of Multilateralism and Diplomacy for Peace on April 24, ARMENPRESS was informed from the press service of the MFA Armenia.

Permanent Representative Mher Margaryan referring to the importance of multilateralism and diplomacy in advancing the agenda of peace, mentioned the special meaning that 24th of April carries for the Armenian people in Armenia and around the world, as they commemorate and pay tribute to the memory of the victims of the Armenian Genocide. Noting that it marks “one of the darkest pages in the history of mankind in the 20th century, when 104 years ago the Armenian people faced the ultimate crime, the crime of genocide”, he went on saying that the Armenian Genocide is a stark reminder to what extent humanity can degrade to in the absence of strong multilateral institutions and crisis of the international order.

The Permanent Representative of Armenia noted that "today, Armenia bears special duty of advancing the human rights agenda, in particular, prevention of crimes against humanity and mass atrocities”. He stressed that Armenia is resolute to contribute to efforts aimed at strengthening multilateral institutions to prevent exclusion, hatred and radicalism and protect human rights and human dignity worldwide.