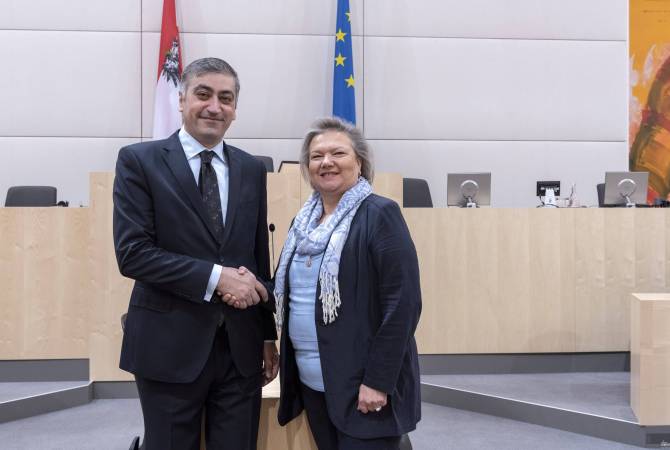 
YEREVAN, APRIL 25, ARMENPRESS. On April 24, Ambassador of Armenia to Austria Armen Papikyan visited the Federal Parliament of Austria where he had meetings with the 3rd President of the National Council Anneliese Kitzmüller and the head of the Armenia-Austria Parliamentary friendship group Gudrun Kugler. Members of the group also attended the meeting, the Armenian foreign ministry told Armenpress.

Ambassador Papikyan noted the symbolism and importance of the meeting in the Austrian Parliament on the day of 104th anniversary of the Armenian Genocide and expressed gratitude for the decision adopted in 2015 by the Parliament of Austria on this issue. Ambassador also highlighted the importance of further enhancing the inter-parliamentary cooperation between Armenia and Austria, including through active contacts between the friendship groups that operate in both parliaments. Armen Papikyan underscored the importance of exchange of best practices between the parliaments of both countries, taking into account the vast experience of Austria in the field of parliamentary system of governance.

Gudrun Kugler in her turn noted that in Austrian Parliament they attach great importance to developing relations with Armenia and the National Assembly of the Republic of Armenia, which is due to high level of interactions between Armenia and Austria.

Both sides highlighted the importance of high level parliamentary contacts, expressing conviction that they would give new impetus to cooperation between the two countries.

During the meeting the sides exchanged views over a number of other issues of mutual interest.