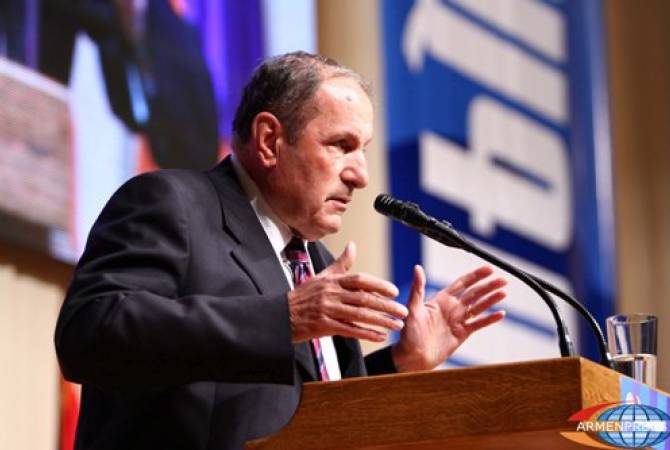 
YEREVAN, APRIL 25, ARMENPRESS. The European Court of Human Rights (ECHR) has delivered today the judgment in the case of Ter-Petrosyan v. Armenia, the ECHR reported on its official website.

Former President of Armenia Levon Ter-Petrosyan (in office 1991-1998) had filed the complaint to the ECHR concerning the 2008-post election unrest in Yerevan, when he was a presidential candidate and staged protests after official poll results showed Serzh Sargsyan to be the winner, something he and his supporters disagreed with. Robert Kocharyan was the outgoing president at the time.

The ECHR unanimously held that there had been:

Complaints under Article 5 § 1 (right to liberty and security) and Article 2 of Protocol No. 4

(freedom of movement) were rejected as manifestly ill-founded.

The case concerned the applicant’s complaint about the dispersal of a protest rally on 1 March 2008, the lack of an effective remedy and his alleged placement under house arrest.

The Court found in particular that the Government, claiming non-exhaustion of domestic remedies, had failed to satisfy it that there had been an effective remedy in the domestic legal system. It further held that the dispersal of the assembly had not been justified.

Although reports had suggested Mr Ter-Petrosyan had been under “house arrest”, there was still a dispute about that incident which was primarily one of fact. The Court found that it was not in a position to conclude he had been deprived of his liberty or had had his freedom of movement restricted.

The applicant alleged that on 1 March 2008 the police had arrived at Freedom Square, encircled the demonstrators and, without warning, had begun to attack them and beat them. The protesters had been quickly pushed out of the square and Mr Ter-Petrosyan had also been ordered to leave but had refused. He was then forced into a car and taken to his house, which he had not been allowed to leave. The roads to his house were blocked by the police and all vehicles were checked. No one could go in or out of his dwelling without the permission of the Special Forces.

The rallies continued throughout the city until late at night, involving clashes between protesters and law-enforcement officers and resulting in 10 deaths, many injured and a state of emergency being declared by the President of Armenia.

The ECHR noted that the then-Government contested these allegations.

Relying on Article 5 § 1 (right to liberty and security), Article 2 of Protocol No. 4 (freedom of movement), Article 11 (freedom of assembly and association), Article 13 (right to an effective remedy), Mr Ter-Petrosyan complained that he had been removed forcibly from Freedom Square, while peacefully assembling, and then placed under house arrest on 1 March 2008 and that he did not have at his disposal an effective remedy in respect of the interference with his freedom of assembly. Relying on Article 14 (prohibition of discrimination), he complained that he had been discriminated against on the grounds of his political opinion.

Decision of the Court

The Court noted that the parties disagreed on whether Mr Ter-Petrosyan had been deprived of his liberty or had faced a restriction on his liberty of movement following the events of 1 March 2008.

At the same time, the Court did not have strong and unequivocal evidence to corroborate those allegations or which had shown beyond reasonable doubt that that the security police had acted in bad faith and had abused its authority by restricting his liberty or freedom of movement. This issue had never been examined by any domestic authority, while the above-mentioned reports, while undoubtedly worrying, were not sufficient fully to accept Mr Ter-Petrosyan’s version of events.

The Court found that there was insufficient substantiation for these complaints and that this part of the application had to be rejected as manifestly ill-founded.

Firstly, the Court rejected the then-Government’s objection that Article 11 was inapplicable: it had already found that there was insufficient evidence to conclude that the organisers and participants of the assembly at Freedom Square had had violent intentions and that the rally had not been peaceful(Mushegh Saghatelyan v. Armenia).

Secondly, the Court examined the Government’s argument that Mr Ter-Petrosyan had not exhausted domestic remedies, particularly by initiating proceedings under Article 68 of the Code of Administrative Procedure (CAP).

The Court noted, that, while the Government had produced copies of three judgments in support of their argument, nothing had suggested that those judgments had been rendered by the Administrative Court under the procedure prescribed by Article 68 of the CAP.

One of the judgments had clearly stated that the claim had been lodged under Article 65, while the other two had been silent on that point. More importantly, all three had concerned challenges to administrative acts, such as decisions by the Mayor’s Office prohibiting the holding of a rally, as opposed to any interfering actions taken by law-enforcement authorities during a demonstration.

The Government had therefore failed to produce any examples of Article 68 being applied in a situation similar to the present case.

The applicability of that Article to these types of situations had not been obvious from its wording either. In particular, it applied only to an administrative action which “no longer has legal force” and which an applicant had a legitimate interest in having acknowledged as unlawful depending on certain conditions, none of which had appeared to exist in the present case. It was therefore not clear whether Article 68 could apply to police actions such as the dispersal of an assembly. In view of that lack of clarity and the absence of any examples of domestic practice, the Court considered that the Government had failed to demonstrate the existence of an effective remedy for the interference with Mr Ter-Petrosyan’s right to freedom of assembly.

Accordingly, the Court found that the applicant had not had an effective domestic remedy for his grievances under Article 11, in breach of Article 13.

Furthermore, the Court had examined the necessity of the interference with the assembly at Freedom Square in Mushegh Saghatelyan v Armenia. It had concluded that its dispersal had not had sufficient justification and had taken place in dubious circumstances, apparently without warnings to disperse and with unjustified and excessive use of force. It had been disproportionate and had gone beyond what was reasonable to expect from the authorities when curtailing freedom of assembly.

There had thus been a violation of Article 11 in Mr Ter-Petrosyan’s case.

The Court rejected his complaint of discrimination over his “house arrest” as manifestly ill-founded and thus inadmissible. It also found that it did not need to examine his allegation of discrimination linked to his right to freedom of assembly, having regard to its findings under Article 11.

The Court observed that the applicant had failed to duly submit a claim for just satisfaction.