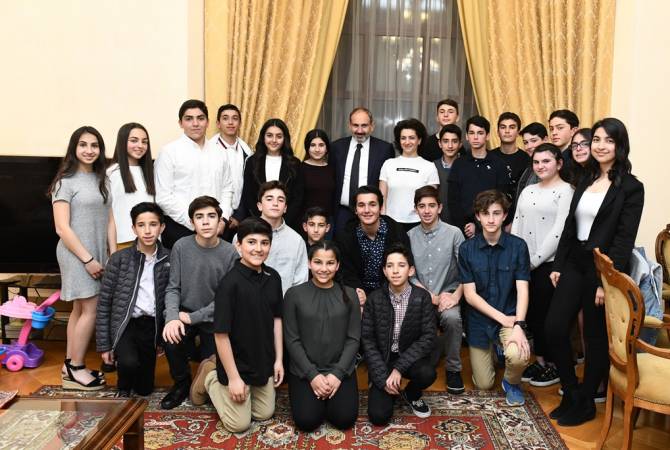 
YEREVAN, APRIL 25, ARMENPRESS. Prime Minister Nikol Pashinyan and his spouse Anna Hakobyan had special guests at their home in Yerevan in the evening of April 24. The Pashinyans were hosting students of the Shamelian Armenian National College of Los Angeles, USA. Pashinyan’s daughters, Shushan and Arpi, were also at the gathering.

During Hakobyan’s trip to the US in early April a group of teachers and parents had told the PM’s wife that the students will visit Armenia at the end of the month and they are very eager to meet the Armenian leader in person.

The PM was pleased to arrange a meeting.

But the students were predominantly interested in the 2018 Armenian Velvet Revolution and subsequent developments in the country. The Prime Minister emphasized that the greatest value of the revolution was that not a single person got hurt and the developments unfolded peacefully. “Our principle was that the revolution should’ve happened peacefully. Human life is very important for us and we couldn’t have sacrificed life for any goal,” he said.

Pashinyan said changes happen on a daily basis in Armenia after the revolution.

“Changes are continuous. One year ago there was no democracy in Armenia, today there is, one year ago there was no free press in Armenia, today there is. In the past elections were being rigged, today not. Today, a year after the revolution, we must carry out an economic revolution. One year ago people carried out the revolution, by going out to the streets and fighting injustice, and it is the people who should carry out the economic revolution also. The Government must encourage and create opportunities for people to be able to work and create results. Our next step must be economic development and overcoming poverty. We can overcome poverty only through work and education. Our objective is to encourage people to work, so they believe in their own strengths. Me and Anna come from an ordinary family, and most importantly we have always believed in our strengths, we always fought. The Government is a partner that should create the opportunity for people to believe in their powers. The Government must create opportunities for education, rule of law, equality and justice, for people to get educated, do what they love and develop the country,” Pashinyan said.

Asked at what age he started wanting to become Prime Minister, Pashinyan said he never had any such desire and never aspired for any status. Pashinyan said he during his entire life he has always fought for the values and principles that he believes in.

“These values are democracy, justice and the rule of law. I believe in these values and basically I knew that this struggle would lead me towards obstacles. I always knew that if I were to deal with politics there would be deprivations and persecutions. At the same time, I will in no case step back from my principles. Those who will try to ignore these principles are the ones who will step back,” Pashinyan said, telling his life experience on how he was persecuted and arrested during the years of being a journalist and then a lawmaker.

He jokingly said that since being elected Prime Minister he feels “jailed” because he walks around accompanied by armed men and his office and residence are guarded by multiple people. Asked whether or not the job is tiresome, the PM said serving the people is a pleasure for him and he has never felt the heaviness of the work.

Asked about his vision for the solution of the NK conflict, Pashinyan stressed that the resolution should be exclusively through a peaceful way and first of all dialogue between the peoples should begin.

“We are now in negotiations with the President of Azerbaijan and we must do everything in order to maintain long-lasting peace in our region,” the Armenian PM said.

On how he sees Armenia’s future, Pashinyan stressed that he sees a free and strong country.

One of the students asked Anna Hakobyan on her feelings during the days of the Armenian Revolution, and whether or not she was afraid. Hakobyan replied by saying that by marrying Nikol Pashinyan she knew that her husband is a rebel and will always fight against injustice. She said she always knew that there would be difficulties and problems. “During our marriage there were persecutions, many challenges, especially when my husband was arrested or in hiding,” Hakobyan said.

During the meeting PM Pashinyan also began asking questions to the children. Asked what they liked most here, the students said Armenia is far better, beautiful and more developed than they imagined. 13-year-old Geghon Gasparyan said he is very impressed with the TUMO Center, another student, Shant Kudnoyan said he was in Armenia four years earlier too, but now he sees many changes. “Unlike the US, people here are kind, smiling and are ready to help,” he said.

Asked by the Armenian PM on their future plans, the kids said after graduating school they plan to go to college, then university, study well and always keep in touch with their homeland.