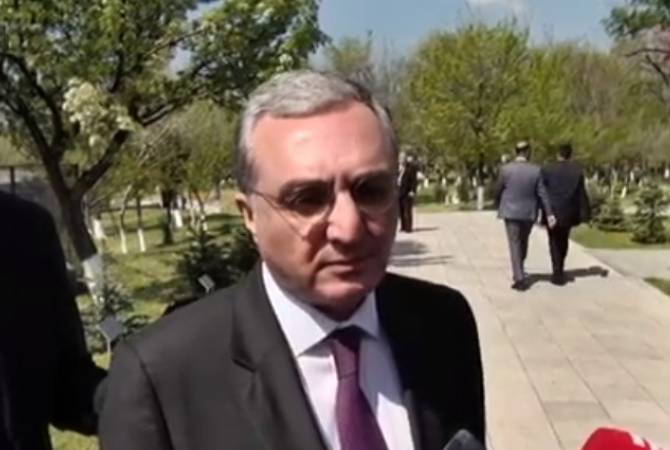 “Today our compatriots together with the friends of the Armenian people are holding a number of commemorative events in different countries of the world. The recognition of the Armenian Genocide not only is a step for restoring justice, but a step aimed at preventing genocides. This is a message that impunity will not be acceptable”, the Armenian FM said.

Asked whether a new process is possible with Turkey, taking into account the increase of Armenia’s international ranking, the FM mentioned low possibility.

“Unfortunately, you all see what is coming from official Ankara, and this doesn’t give hope, quite the contrary, this deserves criticism”, the minister said. Asked whether the recognition of the Armenian Genocide is a precondition, he said no such thing has ever been stated.

FM Mnatsakanyan noted that the fight against denialism remains one of the key foreign policy priorities of Armenia. The minister said they are moving forward the issue of the prevention of genocides in the international agenda for years.

“Preventing genocide is an international obligation, we will continue the works on this path. As you know, the 3rd global forum of prevention of genocides was held on December 9. You know that December 9 has been declared as the Day of commemoration of genocide victims and prevention of genocide by Armenia’s initiative. Armenia constantly renovates the resolutions, develops the legal grounds aimed at the international prevention process. This process never stops. We know the price of the genocide and ought to consistently work for restoring justice. Impunity is unacceptable”, Zohrab Mnatsakanyan said.