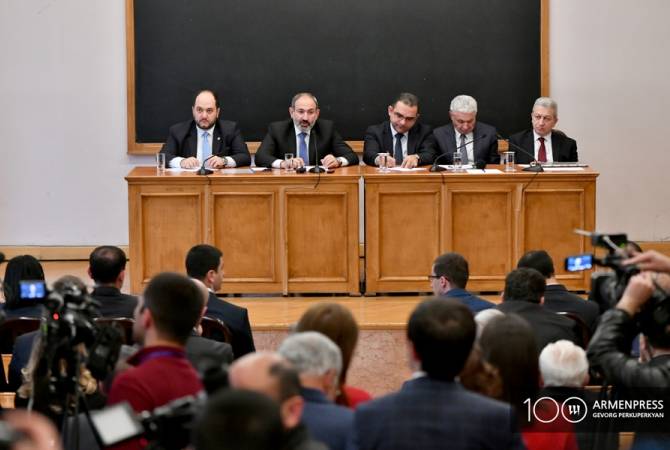 
YEREVAN, APRIL 22, ARMENPRESS. Prime Minister of Armenia Nikol Pashinyan thinks it’s necessary to define the clear position of the Armenian people over Nagorno Karabakh conflict settlement. Pashinyan noted during his meeting with YSO students and professors that when the clear definition of how we see Nagorno Karabah conflict settlement is ready, the other formulations will become easier. Nikol Pashinyan was surprised that up till now no public debates have taken place on this issue.

“When I had just become Prime Minister, some people wrote in social networks, gave interviews saying that they have sold this or that, or even if they haven’t sold it, they will do it soon (Armenian people equalize  surrendering lands will selling lands-edit.). So don’t we ask ourselves why such topics should be present? Finally, when you send me to negotiations, don’t you tell me go and solve Karabakh issue in this way? No, you don’t do that and this is the reason why various rumors arise. Here it’s important to clearly define how we see the solution of Karabakh issue”, ARMENPRESS reports PM Pashinyan as saying. He added that recently he discussed the same issue at the Public Council.

According to him, the one in charge for Karabakh issue is the Armenian people, not the Government of the PM.

“I have my vision of Karabakh conflict settlement, but it’s not the government or the PM in charge for the issue, but the entire Armenian people. We have to define what we want, striving for a all-national consensus”, he added.