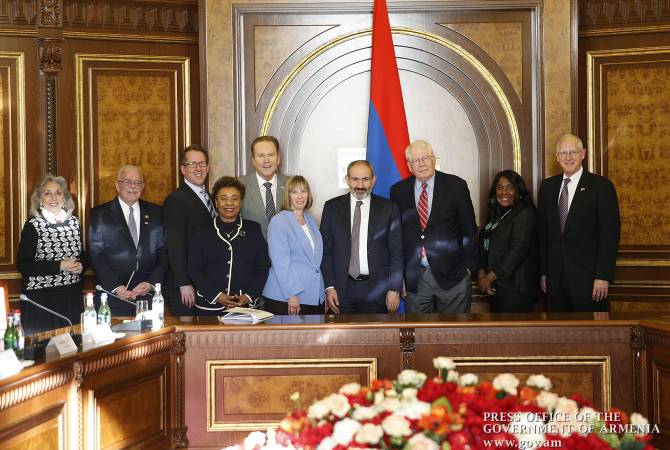 As ARMENPRESS was informed from the Office of the Prime Minister of Armenia, the PM welcomed the visit of the U.S congressmen to Armenia, noting that Armenia highlights the deepening and development of relations with the USA. Nikol Pashinyan noted that Armenia is currently in the stage of radical reforms, and is confidently moving forward by the path of democratic development. The PM referred to the velvet revolution a year ago, and the December 9 early parliamentary elections, noting that since independence it was the first free, democratic and transparent election, which was assessed in the same way also by the observer missions. Nikol Pashinyan added that at this stage the Government takes measures to strengthen democracy institutionally and economically, and expects the support of the international community, including the USA, for that.

David Price thanked the PM for the warm reception. He saluted the democratic reforms in Armenia and noted that the House Democracy Partnership is ready to develop the culture of parliamentarism through exchange of experience and consultations, as well as foster the deepening of the Armenian-U.S. relations and inter-parliamentary cooperation.

PM Pashinyan answered a range of questions of the U.S. congressmen that were about economic reforms, regional situation and developments, the involvement of the youth in the velvet revolution and future reforms, raising the role of women in the political life and so on.

Speaking about democracy, Nikol Pashinyan emphasized that democracy is an internal belief for the Armenian public, but not a geopolitical orientation. As for economic development trends after the revolution, the Prime Minister presented the recorded growth rates and noted that consistent steps aimed at elimination of monopolies, shadow economy reduction and job creation were and are implemented. The Prime Minister noted that the goal of the government is to ensure inclusive economic growth and, in this regard, it is more interesting for Armenia to cooperate in the spheres of infrastructures, innovations and technologies.

US Congressmen expressed willingness to assist in strengthening democracy in Armenia, implementing economic reforms and further deepening of Armenian-U.S. friendship.