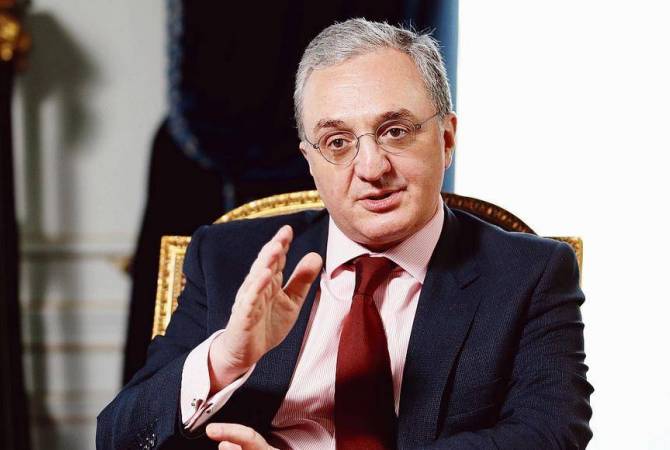 -What is the main purpose of your visit to Paris?

-We have unique, as it is called to say, brotherly relations with France. The agenda of our relations covers a wide range of issues relating to political, economic, cultural and educational fields. This is my third meeting with Jean-Yves Le Drian. Of course, French President Emmanuel Macron attended the 17th La Francophonie summit in Yerevan in October 2018. Moreover, France is one of the most important member states of the European Union with which Armenia has signed the Comprehensive and Enhanced Partnership Agreement (CEPA) in 2017. This visit is an additional investment in the firm architecture of our bilateral relations.

-Can you state that there is any progress on the Nagorno Karabakh conflict settlement process?

-On Monday I met with my Azerbaijani counterpart in Moscow. The meeting was also attended by Russian foreign minister Sergey Lavrov and the OSCE Minsk Group Co-Chairs (France, Russia and US). This meeting was held after the March 29 summit of the leaders of Armenia and Azerbaijan. From our point of view, the subject of the matter is the security of 150.000 people living in Artsakh. These people are under constant threat, taking into account the existing hatred atmosphere that has been sown against Armenians.

The settlement can be only political, and the Minsk Group Co-Chairmanship is the only format for achieving this. But at the same time, an atmosphere contributing to peace and contacts between the people are needed here. We cannot hold negotiations on the one hand and have hatred demonstrations on the other hand. The security of the people, the status of Artsakh are priority issues. 150.000 people living there should participate in this process. They are the guarantors of the Armenian identity, an identity which still faces the denialism of the genocide.

-More specifically, there is almost no progress in this memory issue…

This decision has deeply touched the Armenian people. There was a desire to completely eliminate us. But we survived, strengthened and developed: this is victory. But, unfortunately, we still face the consequences of the Turkish denialist policy. This denialism not only relates to Armenians, but also the whole humanity. The Turkish President just “threw out of the window” the Zurich protocols on establishment of diplomatic relations and opening of the borders between Armenia and Turkey which were signed in 2009. We were committed to these protocols and were ready to normalize the relations with Turkey without preconditions.

-What are your priorities a year later from the velvet revolution of Armenia held in spring 2018?

-Among them are the cooperation with Europe, the rule of law, justice, anti-corruption fight, all the reforms for which the people gave a mandate to us. I would also mention the tax reforms and the economy. Armenia has a huge potential. The causes of our velvet revolution were domestic, not geopolitical: we are pro-Armenian, not a pro-European, pro-American or pro-Russian, even if we have close cooperation with Russia.