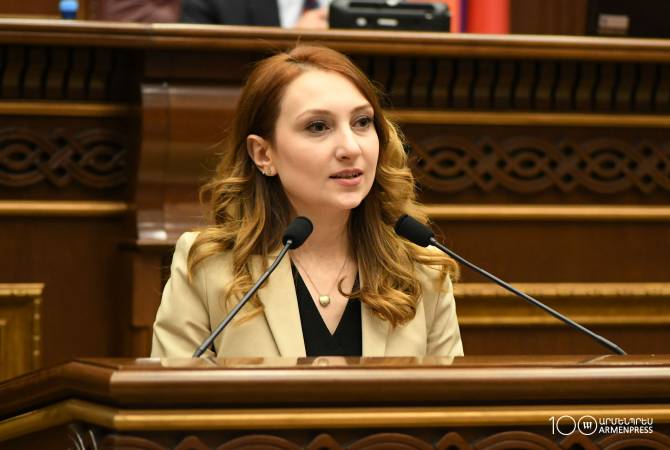 
YEREVAN, APRIL 18, ARMENPRESS. My Step faction leader Lilit Makunts says she and several other lawmakers from the ruling alliance will introduce a proposal to initiate a process of constitutional amendments.

“In response to questions by the parliamentary opposition regarding the strengthening of parliamentary supervision, I am informing that soon I and several other Members of Parliament from the My Step faction will introduce a proposal on launching a process of Constitutional amendments, the purpose of which, among others, will be to summon bodies under the government and the prime minister to Q&As during regular session of parliament. Therefore, what recently was described as something impossible or something that the parliamentary majority opposes, as you see is not true. And therefore, despite the desire on making the National Security Service, the Police, the State Revenue Committee a participant of the parliamentary Q&As belonged to opposition politicians, the proposal to carry out joint work in this direction was found to be unrealistic. That is why, attaching importance to the public accountability of these structures we ourselves will initiate the process of the required changes for summoning them to parliament,” Makunts said.

On April 17, Makunts had suggested the opposition parties of parliament to jointly develop a bill that would enable the parliament to bring the law enforcement agencies into the sphere of parliamentary supervision.