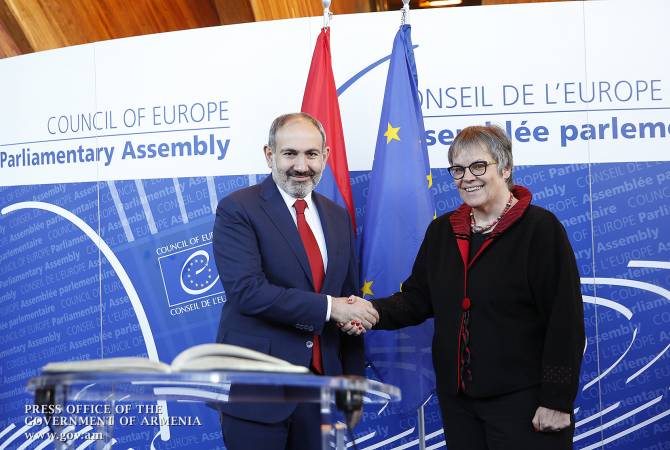 
YEREVAN, APRIL 11, ARMENPRESS. Armenian Prime Minister Nikol Pashinyan arrived in Strasbourg in the evening of April 10. The Armenian PM’s visit to the Council of Europe kicked off in the morning of April 11.

The first meeting of Pashinyan was with Parliamentary Assembly of the Council of Europe (PACE) President Liliane Maury Pasquier. Prior to the meeting the Armenian PM signed the PACE President’s Golden Book, Pashinyan’s office said.

Pasquier welcomed Pashinyan’s visit to the Council of Europe, noting that she is happy for meeting him once again, this time in Strasbourg. The PACE President expressed satisfaction over her March visit to Armenia, when she had productive meetings and discussions with the Armenian leadership, and delivered remarks at the parliament and attended the inauguration of the Europe Square in Yerevan.

Liliane Maury Pasquier noted that the busy agenda of the Armenian PM’s visit, the high-level meetings with CoE officials, his speech at the plenary session of the PACE spring sitting and the inauguration of the Armenian Velvet Revolution exhibition proves the productive process of Armenia-Council of Europe partnership and bilateral willingness to deepen it. According to the PACE President, the CoE attaches importance to cooperation with Armenia in direction of strengthening democratic institutions, protection of human rights and establishment of the rule of law.

Armenian PM Nikol Pashinyan thanked for the reception and noted that it is with warmth that he remembers the meeting with Pasquier in Yerevan and is happy to see her once again. The PM noted that Armenia is a full member of the CoE and PACE, and expressed satisfaction over the cooperation with the Council of Europe, the high level of which was reiterated with the results of the PACE Armenia Co-Rapporteur’s and the PACE President’s visits and the assessments and report about democracy in Armenia.

The sides also discussed prospects of developing cooperation between Armenia and the Council of Europe.

They addressed the ongoing steps of the 2019-2022 Armenia-CoE action plan and highlighted the complete implementation of obligations that the sides have assumed by it.

Pashinyan noted that the Armenian Government has a large agenda of reforms, and the Council of Europe’s support in this process is important.

The PACE President welcomed the implementation of democratic changes in Armenia and reiterated readiness to support Armenia in developing democracy, strengthening the rule of law and protection of human rights.

The NK conflict settlement negotiations process was also touched upon.