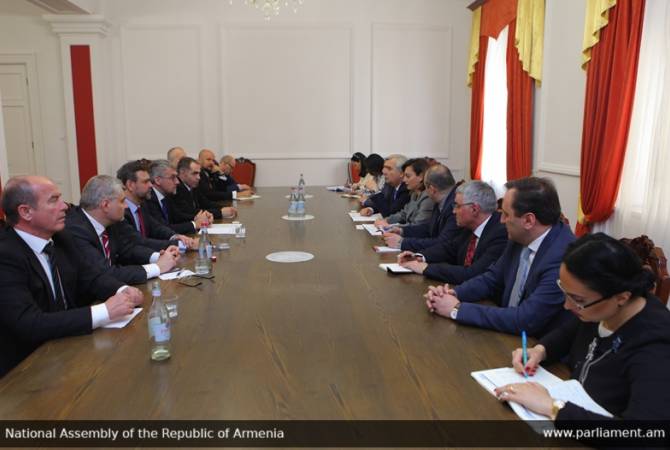 Chairman of the Armenian Parliamentary Standing Committee on Defense and Security Andranik Kocharyan attended the meeting.

The Minister has noted that Armenia is the important partner of the Czech Republic in the South Caucasus Region, expressing conviction that his meetings will also create fertile soil for the deepening of further cooperation.

Lena Nazaryan has underlined with satisfaction that during last years the bilateral political dialogue has been active, which is the result of the active work of the parliament and parliamentarians. The Vice Speaker of Parliament, informing that Armenia-Czech Republic Friendship Group had already been formed, evaluated the effective cooperation of the Armenian and Czech parliamentarians on the inter-parliamentary platforms.

“It is important that our colleagues show balanced position in the international organizations in the NK problem of vital significance for us, and its settlement we see exclusively through peaceful means, in the format of the OACSE Minsk Group Co-Chairs,” Lena Nazaryan said.

In this context Lubomir Metnar has stressed they are for the settlement of the problems exclusively through peaceful means and negotiations and they show balanced approach in the conflicts of the regional countries. He has underscored that his country backs the mediatory efforts going on by the OSCE Minsk Group Co-Chairs.

Touching upon the ratification of the Armenia-EU Comprehensive and Enhanced Partnership Agreement the Vice Speaker expressed hope that it would be completely ratified by the Czech Republic in the near future.

The guest was interested in the discussion of the theme The Democratic Control of the Armenian Armed Forces held in the Parliament. Andranik Kocharyan presented details from the discussion, highly assessing the reports made by the representatives of the Czech Republic. The Committee Chair highly appreciated the Czech Minister’s visit to Armenia, especially in the context of signing the Agreement concerning the two countries’ military-technical cooperation. According to the MP, Armenia being CSTO member state highlights the cooperation with the NATO within the framework of the Individual Partnership Action Plan (IPAP), as well as the relations with the NATO member states.