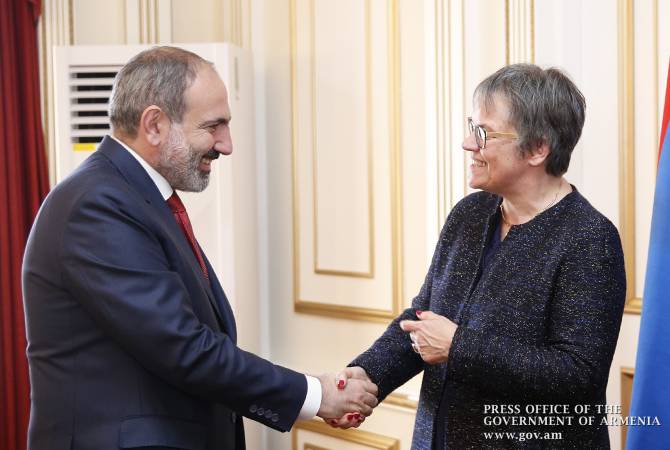 
YEREVAN, MARCH 27, ARMENPRESS. Prime Minister of Armenia Nikol Pashinyan today had a meeting with President of the Parliamentary Assembly of the Council of Europe (PACE) Liliane Maury Pasquier in the Armenian Parliament, the PM’s Office told Armenpress.

During the meeting PM Pashinyan said the Council of Europe and PACE are key partners for Armenia in the process of developing democracy and strengthening the civil society. According to Pashinyan, the political changes which launched last year were linked with these processes, they didn’t contain any foreign involvement because democracy for the Armenian people is not a foreign political orientation, but an internal belief and value system. “The Armenian government has a great agenda of democratic reforms, and the active cooperation with the European structures, including the CoE and PACE, plays a vital role for their effective implementation”, the PM said and in this context attached importance to his upcoming visit to Strasbourg in April during which he will deliver remarks at the PACE spring session.

The PACE President said she is happy to meet with the Prime Minister of Armenia and discuss cooperation related issues. She said PACE carefully followed and continues following the developments in Armenia and welcomes the peaceful implementation of political changes. “The citizens of Armenia managed to reach democratic changes peacefully, and this is a very good achievement for Armenia”, Liliane Maury Pasquier said. She also touched upon the results of the recent snap parliamentary elections in Armenia, stating that the fact that majority of the citizens trusted their vote to the political force led by the PM is a great support to the government for implementing its reform agenda. The PACE President assured that the CoE and PACE are ready to support Armenia in this process and stated that they are looking forward to welcome Pashinyan in Strasbourg in two weeks.

The sides also discussed the prospects of deepening the bilateral partnership.

Prime Minister Pashinyan said strengthening democracy, institutional development are a priority for the Armenian government and in this context the constant strengthening of political institutions, independence of judiciary, freedom of speech are included in the agenda.

Liliane Maury Pasquier once again stated that the CoE and PACE are ready to assist the government in this process, including within the frames of the 2019-2022 Action Plan with Armenia.

Pashinyan thanked the PACE President for the readiness and stated that Armenia is a full member of the CoE and PACE and is interested in developing the mutual partnership with the European structures aimed at raising democratic standards in the country as its citizens have gained that right, and the government will make all efforts to ensure it at best.