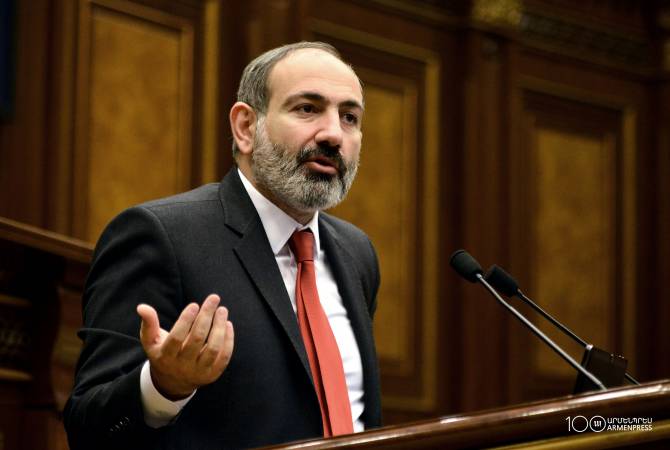 
YEREVAN, MARCH 27, ARMENPRESS. Armenian Prime Minister Nikol Pashinyan is emphasizing that during the upcoming meeting with Azerbaijani President Ilham Aliyev views will be exchanged around the inclusion of Artsakh in the negotiations of the NK conflict settlement.

The PM was speaking in parliament today when asked to comment on the matter by Prosperous Armenia party lawmaker Naira Zohrabyan.

“Yes, of course, this was the first emphasis in my remarks in Stepanakert”, the PM said, referring to his speech at the Armenia-Artsakh joint Security Council session that took place recently in Stepanakert city.

“I said also during my press conference that I want us all to understand correctly because there are different interpretations both inside and outside Armenia. Strangely, there is an interpretation in Armenia also that this is a proposal on changing the negotiations format. This is not a proposal to change the negotiations format, and it can’t be”.

Pashinyan added that he can predict the upcoming talks with Aliyev will take place within the framework of the earlier statements. “What I have said during the Armenia-Artsakh joint Security Council sessions in Stepanakert is essentially the agenda with which we are heading to the negotiations, discussions, and basically this is the platform that we will rely on during the entire process of further negotiations,” Pashinyan said.

Asked again by Zohrabyan whether the upcoming meeting with Aliyev has an agenda, Pashinyan said that during the previous meetings with the Azerbaijani president he had expressed his stance that at least in the initial phase these meetings should not have a concrete agenda. “There must be a broad circle of issues, and we must simply exchange ideas over various issues,” Pashinyan said.

The Armenian Prime Minister will meet the Azerbaijani President in Austria March 28-29.

Co-chaired by Prime Minister of the Republic of Armenia Nikol Pashinyan and President Bako Sahakyan of the Republic of Artsakh, on March 12 the Security Councils of Armenia and Artsakh held a joint session in Stepanakert. The agenda included the joint assessment of the current situation in the Nagorno-Karabakh peace process and the outline of the coordinated actions.

Let me welcome the joint session of the Security Councils of the Republics of Armenia and Artsakh, which is an unprecedented event in the history of our two Republics. This event is both symbolic and, at the very same time, has a specific meaning. I mean that the relations between the Republic of Armenia and the Republic of Artsakh have entered a qualitatively new stage. What other manifestations that may have in the near future is perhaps one of the most important topics of our discussion.

This is my first visit to the Republic of Artsakh following the parliamentary elections of December 9, 2018. I would like to emphasize that My Step Alliance received a strong mandate from the people of Armenia to raise the level of the involvement of Artsakh Republic in the peace process and take specific steps to that end. These goals were of paramount importance in the electoral program of My Step Alliance.

The Government of the Republic of Armenia and me, as a prime minister, who has received a strong vote of confidence, will take consistent steps in this direction, and this issue will continue to be one of the most important points of our discussions with the President of Azerbaijan Ilham Aliyev and the OSCE Minsk Group Co-Chairs.

As a matter of fact, the current framework of the negotiations involves all concerned parties, except one. Azerbaijan is represented by President Aliyev who, by the way, also represents, as he says, the Azerbaijani community of Nagorno-Karabakh, because the representatives of that community participated in the presidential elections in Azerbaijan as citizens of that country and, therefore, gave the President of Azerbaijan the mandate to represent them. Thus, it can be said with confidence that the presence of Azerbaijan’s President at the negotiations table ensures the presence of those Azerbaijanis who used to live in Karabakh before the conflict.

I have repeatedly stated that the Prime Minister of Armenia cannot have such a mandate as the people of Artsakh are not participating electoral processes in Armenia, they do not vote, therefore, the Prime Minister of Armenia is out of the circle of those who have the legitimacy to represent the people of Artsakh. This is not a matter of whims or a precondition but a matter of legitimacy, and the latter is a key factor in modern-day relations not only in terms of domestic policy, but also in terms of interstate and international relations.

By the way, all those comments stating that the Republic of Armenia and the Prime Minister are thereby trying to shake off their share of responsibility and put the burden on the authorities or people of of Artsakh are baseless. To avoid any speculation, I consider it necessary to underscore that the Republic of Armenia has always been and will remain the number one guarantor of Artsakh’s security and will continue to be actively involved in the peace process.

The next most important question that needs to be answered is whether the Armenian government accepts the three principles and the six elements, proposed by the OSCE Minsk Group Co-Chairs as a basis for the negotiation process. This is indeed the most important issue, but important clarifications are needed to answer to this question. What do these principles mean in practice, and who is entitled to interpret them? This is important as we consider unacceptable the way Azerbaijan interprets those principles.

Of course, we can present our own interpretation of these principles, but there will be no use, because our objective is not the engagement in a verbal dispute, but the efficient negotiation process. Therefore, the negotiations should be based on statements which give no room for misinterpretations.

But during the last ten years, the principles and elements proposed by the Co-Chairs, as I have already mentioned, have given rise to the most controversial interpretations, and thus the most important objective of the forthcoming negotiation process should be the clarification of the so-called 3 main principles and 6 elements, and we are open to such talks.

The next important issue is to prepare peoples for peace. I consider it worth emphasizing that preparation of population for peace cannot be a separate issue of only one of the governments involved in the negotiations, and implies joint efforts. For example, preparation of the Azerbaijani population for peace should take place not only with the participation of authorities of Azerbaijan but of Armenia as well.

We are going to have a first-ever joint discussion of priority issues of vital importance to our two Republics, that is, our Homeland. During this time, we have had several intermediate meetings at different levels, which led to the idea to hold a joint Security Council meeting.

As it used to be during all these years, the tasks set out in the national agenda have remained unchanged. I am convinced that you all share my firm belief that the international recognition of the independence of the Republic of Artsakh has been and will remain a priority issue for our homeland. At this joint session, we will also have an opportunity to discuss the ways of achieving that goal.

We know that the Prime Minister of the Republic of Armenia has had several meetings during this period, and I asked Mr. Prime Minister to brief us on the outcome of those meetings and discussions. In turn, I will give details of my latest meeting with the Personal Representative of the OSCE Chairman-in-Office. We talked about the situation at the Line of Contact and the negotiation process. Today’s unprecedented joint session will give us an opportunity to address the problems faced in the economy, the developments in our public life, as well as to outline the next steps aimed at enhancing national security, strengthening and further developing our homeland.

I welcome this initiative. I am convinced that our joint session will create favorable conditions for successful work in the aforementioned areas.

During the discussion that followed, the members of the Security Councils of Armenia and Artsakh dwelt on Artsakh’s security system and reaffirmed that the defense capacity was at a high level.

At the same time, both sides reiterated their support and commitment to the exclusively peaceful settlement of the conflict under the auspices of the OSCE Minsk Group, based on the fundamental principles of international law, in particular the right of peoples to self-determination. They stressed that the security and the status of Artsakh were absolute priorities for the Armenian side.

The speakers highlighted the need for shaping an atmosphere of peace and trust, reducing risks, developing appropriate incident prevention mechanisms and confidence building measures, as enshrined in the final document of Dushanbe and earlier in the framework of the Vienna and St. Petersburg summits.