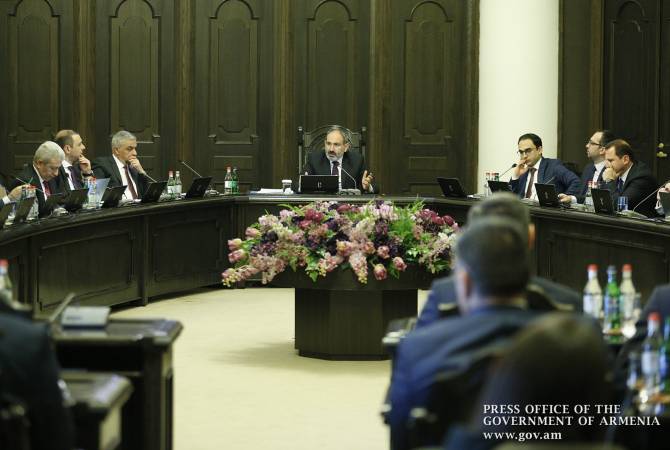 As ARMENPRESS was informed from the Office of the Prime Minister of Armenia, the Government approved 2wo reportable and 5 non-reportable issues featuring on the agenda. The Executive amended one of its previous decisions to allocate 352,226.5 thousand drams without a tender to Union of Leading Technology Enterprises NGO under the STEM Education and Robotics Development in Schools program with a view to ensuring the smooth operations of engineering laboratories. In this connection, the Prime Minister noted that the amendment will ensure the activities of existing laboratories and the introduction of new laboratories.

“But our message is that like all other spheres, no monopolies will be allowed in this sphere. Of course, we will continue to cooperate with the partner organization in the normal way, but the government is open to other proposals. The rationale behind the funding and the operations of the new proposals will be slightly different,” the Premier said.

The Head of Government stressed that corruption and electoral frauds should be curbed in the educational system as well.

“This is a complicated task, but it does not mean at all that we have to give up addressing this issue. Deeply rooted in our society, these issues will predetermine the future of our state and society. The history of the Third Republic was mostly marked by the reluctance of the authorities to discuss issues openly, frankly and honestly with the public at large. We must get rid of such practices. We should discuss any such issue with the public in an atmosphere of openness, otherwise we will come to a state of stagnation,” Nikol Pashinyan said.

The Head of Government underscored that the educational system should not be politicized in its integrity. “This needs to be stated very clearly. For example, the rectors who have made the system of higher education part of the party cells and who have narrowed our students’ opportunities have nothing to do in the new Armenia. This is my clear-cut position, and we should not be afraid to state it. Let them cling to the doors, their desks and armchairs, but they have nothing to do in the new Armenia. Let them find another job, another mission. The rectors who have shut the doors before a student in the Republic of Armenia cannot continue in office. The Revolution started with this motto and will be completed with it. There is no option. Yes, this is a political decision which will be implemented sooner or later. Let no one think that we forgotten the Revolution’s key objectives,” Nikol Pashinyan noted.

Taking into consideration the tradition and the years-long achievements, the Ministry of Sport and Youth Affairs considered it expedient to allocate the proposed funds in the form of a grant to Armenia, Sevan and Dynamo NGOs in the first half of the year without a tender. The Government passed a relevant decision to that effect. The meeting next referred to those sport halls given for rent. The Prime Minister stressed that stock-taking should be carried out in this area.

“We need to understand what percentage of these transactions and deals were shady in fact. We need to see whether the amounts stipulated in the contracts match the ones actually paid, and whether the state-owned infrastructures serve their true purpose, which is extremely important,” Nikol Pashinyan ponted out.

The Prime Minister instructed the relevant departments to conduct a joint study and report back the findings within a month.