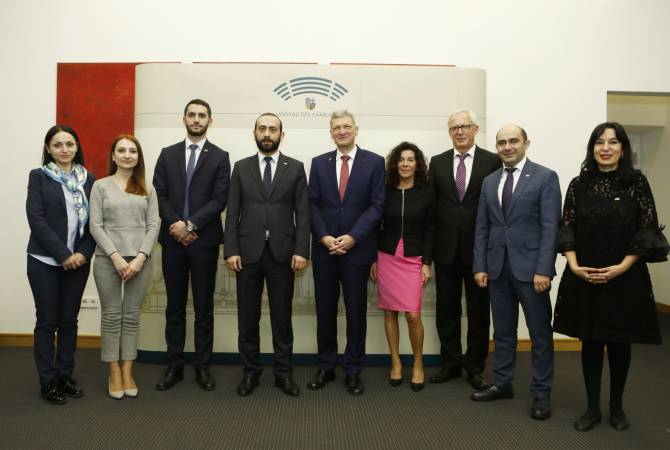 
YEREVAN, MARCH 22, ARMENPRESS. The delegation led by Speaker of Parliament of Armenia Ararat Mirzoyan being on an official visit on March 18-21 in the Federal Republic of Germany, on March 21 had meetings in Saarland University and in the Landtag (State Legislature) of the state of the Saarland, the Armenian Parliament told Armenpress.

The President of the Parliament Stephan Toscani received the members of the Armenian delegation in the Landtag (State Legislature). Welcoming the delegation led by Ararat Mirzoyan he has informed that it is a great honour for him to host the parliamentarians of Armenia. The members of the delegation got familiarized with the works of the parliament, exchanged thoughts on the activation of the inter-parliamentary relations, and the implementation of the joint programs in the Armenian-German economic, cultural and educational spheres.

Speaker Mirzoyan left a note in the Book of Honourable Guests of Parliament of the Saarland.