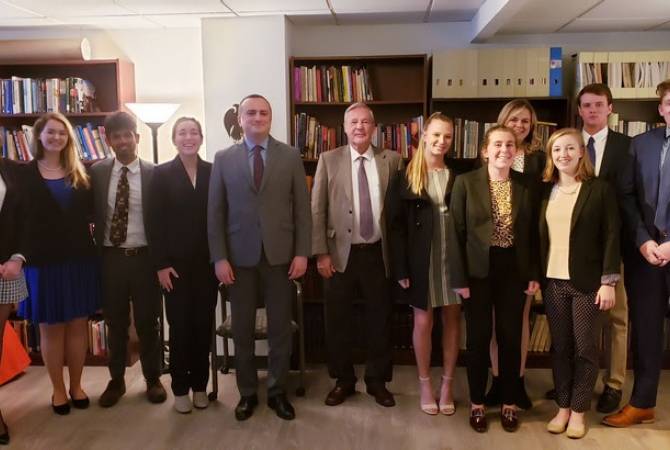 
YEREVAN, MARCH 19, ARMENPRESS. Permanent Representative of the Republic of Artsakh to the USA Robert Avetisyan met with Professor of the International Relations Department of the Clemson University of the State of South Carolina Vladimir Matich and a group of students on March 19.

As ARMENPRESS was informed from the press service of the MFA Artsakh, during the meeting, Robert Avetisyan briefed on the history of Artsakh, the causes of the Azerbaijan-Karabakh conflict and the current stage of the settlement process, as well as the historical and legal bases of the independence of Artsakh.

The Permanent Representative of Artsakh also answered the numerous questions of the students related to the position of the Republic of Artsakh on the conflict settlement, the role of the USA in the process as the OSCE Minsk Group co-chair state, as well as the realities in Artsakh and the realization of their fundamental rights and freedoms by its citizens.

During the meeting, archival documents of the U.S. Department of State dated to the early 20th century and remarkable publications by the foreign mass media on the Azerbaijan-Karabakh conflict were presented as well.