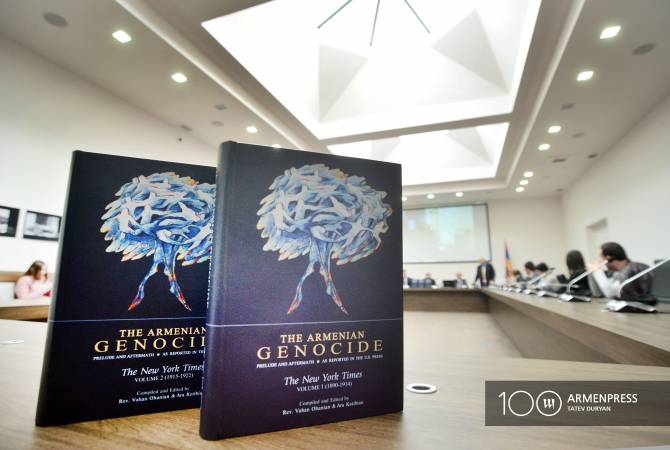 
YEREVAN, MARCH 20, ARMENPRESS. The collections comprised of articles on Armenian Genocide published in the American press, in particular, The New York Times, touch upon the Hamidian, Adana massacres, as well as their consequences. They also include the articles of Turkish ambassadors, consuls, reports Armenpress.

Today the reporters had a chance to meet with them at the Armenian Genocide Museum-Institute.

“There is also information in the book about the foreigners and Armenians who provided monetary and other support to Armenian orphans, schools taking care of their needs, and the notes of the Turkish ambassadors and consuls existing in various articles greatly contradict to the notes of those who survived the crime. The same policy: nothing has changed. They tried to justify themselves at that time, claiming that Armenians are the guilty ones. After the Holocaust, the issue of the Armenian Genocide is the most studied in the world. There are thousands of monographs about it”, Ara Ketibian said, adding that the titles of the presented hundreds of articles explain that a really planned genocide has taken place.

Father Vahan Ohanyan stated that he knows his colleague long ago. “Ara encouraged me to start this work. Knowing his capacities and seriousness, readiness to study the past, I felt trust. I also met with Vigen Babkenyan who has dedicated many publications to the Armenian Genocide. I had a chance to visit this young man, and he showed me an entire collection of articles”, he said, noting that collecting the articles was a very difficult job. “We faced many difficulties, even had to buy some articles. We found all reports on Armenians with key words”, he said.

VivaCell MTS has assisted the publication of the book. Its founder and General Manager Ralph Yirikian said the book shows to the world that we have respective documents which are our witnesses and present what path we have passed, through which difficulties. “By reading this book maybe the conscious person, the civilized world will understand that it is necessary to be cautious and not to allow such atrocities to happen to other nations”, he said.

Vahan Ohanyan and Ara Ketibian have been awarded with the Aurora Mardiganian Medal of the Armenian Genocide Museum-Institute Foundation for the great contribution to the preparation of these collections.