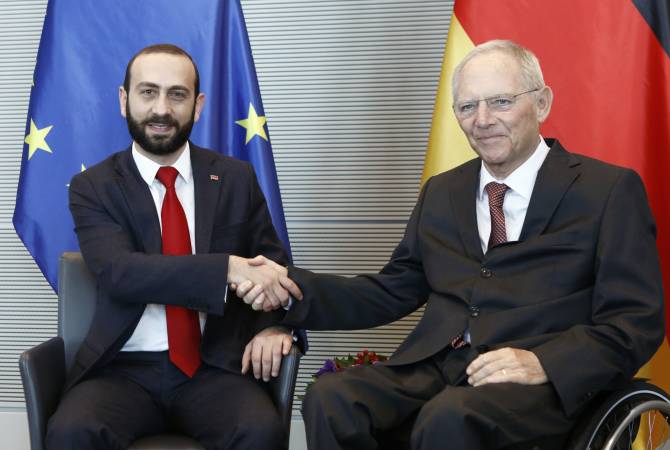 
YEREVAN, MARCH 19, ARMENPRESS. The delegation led by the Speaker of the National Assembvly of Armenia Ararat Mirzoyan, which is in Germany on an official visit from March 18 to 21, met with President of the Bundestag Wolfgang Schäuble on March 19.

As ARMENPRESS was informed from the press service of the parliament of Armenia, the President of Bundestag noted in his welcome speech that they followed the Velvet revolution of Armenia in April-May 2018 with great enthusiasm, underlining that no similar tevolution has ever taken place in the world.

Thanking for the reception, Ararat Mirzoyan noted that this is his 1st official visit to Europe in the position of the Speaker of the National Assembly. The Head of the legislative of Armenia presented the incentive for the Armenian revolution to his German partner, the post-revolutionary period and the early parliamentary elections, that were highly assessed by the international observers.

Highlighting the parliamentary traditions of Germany, Ararat Mirzoyan noted that the experience of the Bundestag can be very useful for the National Assembly of Armenia. In this context the sides expressed readiness to make mutual visits more frequent.

During the conversation the members of the Armenian delegation and Wolfgang Schäuble discussed a range of issues referring to the Armenian-German agenda, the ratification of the Armenia-EU agreement, visa liberalization, assistance of the European countries in the development of infrastructures in Armenia.

Referring to the cultural and educational links between Armenia and Germany, the Speaker of the parliament of Armenia suggested his German colleagues to consider the issue of establishing an Armenian-German university in Armenia, which will further deepen the relations between the citizens of the two countries.

Ararat Mirzoyan and Wolfgang Schäuble agreed to continue the constructive dialogue and the discussion of the issues of mutual interest in the evening, during the official dinner on behalf of the President of the Bundestag in honor of the head of the Armenian parliament.