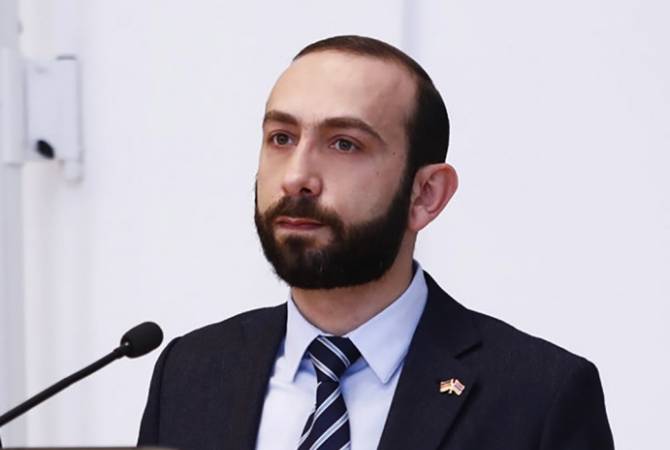 
YEREVAN, MARCH 18, ARMENPRESS. Speaker of Parliament of Armenia Ararat Mirzoyan on March 18 delivered remarks at the Berlin Parliament on the sidelines of his official visit in Germany, the Armenian Parliament told Armenpress.

Let me thank you for this opportunity to meet and welcome you at the Berlin Parliament.

The Berlin Wall, separating the same people, country and your lovely city from each other, is still fresh in people’s memories. On November 9, 1989, the people of Germany, who gathered across the idea of the unity in the Eastern Germany, managed to destroy what led to the German unification on October 3, 1990 and opened a new page in the world history. The world is happy to again see a united and dynamic Germany.

One of the pictures in the Berlin Wall museum depicts a woman leaning on the wall and mentions her words: “The pressure that I used with my hand on the wall in 1987 gave its result two years later”.

The fight of the citizens of Armenia for many years for the sake of democracy, human rights and rule of law in our country resulted in the 2018 April-May velvet, peaceful revolution which was held completely in a constitutional way.

Now we need to strengthen the democratic model of the development and develop its efficiency. In this sense we attach importance to the deepening of our relations with the EU.

We are determined to jointly expand and deepen the process of institutional reforms with our European partners.

We highly value the balanced policy run by Germany in South Caucasus and its support to different sectors in Armenia.

The high-level political dialogue between our two countries, the inter-parliamentary cooperation, the mutual partnership, and the intensification of economic and cultural ties are vivid examples of further deepening of the cooperation.

The capital cities of the two states can play a unique role in the context of deepening the Armenian-German ties.

I hope Berlin and our 2800-year-old capital Yerevan will be able to jointly develop cooperation projects to learn from each other and carry out exchange of experience. I am sure Berlin’s experience in city governance and city economy’s sustainable development will be useful for the Yerevan city authorities.

Dear Mrs. Schmidt, dear colleagues, once again thank you, wish you new achievements during your complex and responsible activities for the benefit of the citizens of Berlin”, Ararat Mirzoyan said in his remarks.