‘Denialism is part of genocide’: Author of The Sin of the Fathers book on Turkey’s policy | ARMENPRESS Armenian News Agency

‘Denialism is part of genocide’: Author of The Sin of the Fathers book on Turkey’s policy 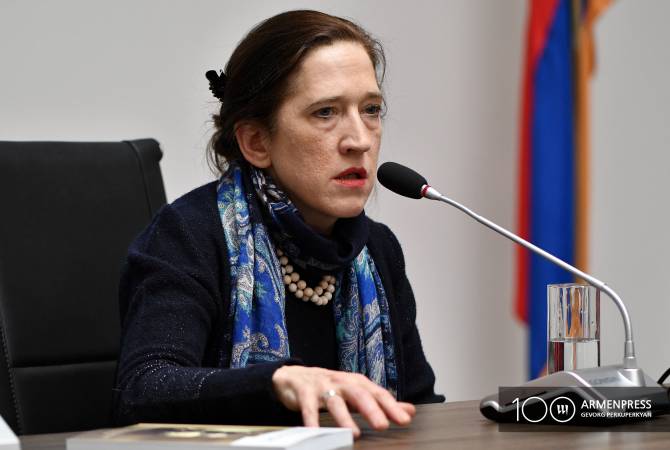 
YEREVAN, MARCH 16, ARMENPRESS. The Sins of the Fathers book proves that the genocide of Armenians and other peoples committed by Young Turks and its denial by Turkey are almost the same criminal acts, reports Armenpress.

Siobhan Nash-Marshall, author of the book, professor at the New York Manhattanville College, introduced her book during a discussion today in the Armenian Genocide Museum-Institute in Yerevan.

“This book is a philosophy and history. I think that Turkey’s denialism and the genocide are the same. I knew about the Armenian Genocide when I was a child. We need to remember it. The fact that the Genocide has been committed, is not questioned. The question is why it was committed and why it is being denied. That is what my book is about. Denialism is a part of genocide. Turks deny the Genocide, it means they continue the genocide. These are the same things. Anyone who thinks that denialism and genocide are different, he/she is mistaken”, the Professor said.

Siobhan Nash-Marshall said she wants to show why America and Europe should love and accept the truth. “Europe knew 40 years ago that a genocide could take place and did nothing, except from finding cooperation ways. Everything was left on the paper”, the author of the book said.

She noted that the Western Armenia on the map was called Western Armenia before the World War II. Siobhan Nash-Marshall said no matter how much Turkey would like to call it Eastern Anatolia, all know that it was called Armenia. “We will never question this. For me the question is why it is being denied. And it’s very difficult to answer to this question”, she said.

Touching upon the reasons of writing the book, the author said during the years of the Armenian Genocide many Americans paid millions of dollars for saving the lives of Armenians, built schools and saved children. And her ancestors have been one of those Americans. Siobhan Nash-Marshall said she comes from a family that has never forgotten the Armenian Genocide.

The presentation of The Sin of the Fathers was also held in Artsakh in autumn 2018.