There is no obstacle for Armenia-EU CEPA ratification – Italian Ambassador 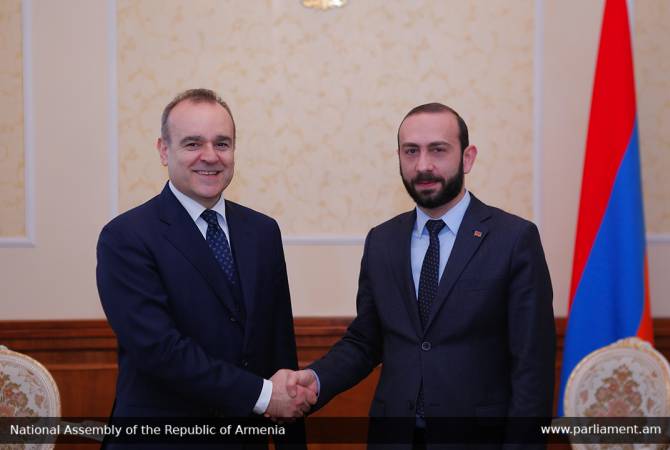 
YEREVAN, MARCH 15, ARMENPRESS. President of the National Assembly of Armenia Ararat Mirzoyan received the Ambassador Extraordinary and Plenipotentiary of Italy to Armenia Vincenzo del Monaco on March 15, ARMENPRESS was informed from the press service of the parliament of Armenia.

Welcoming the guest the Head of the parliament has highlighted the dynamically developing friendly relations with Italy, which are based on our two peoples’ centuries-old rich historical-cultural heritage. Ararat Mirzoyan has noted that all preconditions are available for the further development of the bilateral relations.

The President of the National Assembly emphasized the visit of the President of Italy Sergio Mattarella to Armenia in July of the last year, which had given a new impetus to the Armenian-Italian centuries-old relations. According to him, such visits promote the deepening and enlivening of the bilateral ties.

Evaluating the activities of the Parliamentary Friendship Groups in the development of the inter-parliamentary ties, the Head of the legislative body has stated that in the near future in the National Assembly an Armenian-Italian Friendship Group would be formed and firm relations would be established between them.

The President of the National Assembly expressed his gratitude for the participation of the Italian parliamentarians of the OSCE Observation Mission in the parliamentary elections held on December 9.

Touching upon Armenia-European Union Comprehensive and Enhanced Partnership Agreement, Ararat Mirzoyan expressed hope that the Italian colleagues would show support in ratifying the document within possible short term in the Italian Parliament.

The Head of the Parliament highly assessed personally the Ambassador’s activities in the development of the Armenian-Italian relations for the benefit of the two countries’ development and welfare.

The National Assembly President reaffirmed his invitations to the Presidents of the Senate and the Chamber of Deputies of Italy to visit Armenia.

Vincenzo del Monaco has congratulated Ararat Mirzoyan on being appointed in the high post and agreed that the bilateral relations are based on the centuries-old traditions. “Italy is the country, where the Armenian community has been formed since ancient times,” the Ambassador said. In the advancement of the political dialogue between the two countries he emphasized the role of the parliamentary diplomacy. With regards to the Armenia-EU Agreement the Ambassador noted that there is no obstacle for its ratification, it is carried out in accordance with the national legislation procedures.