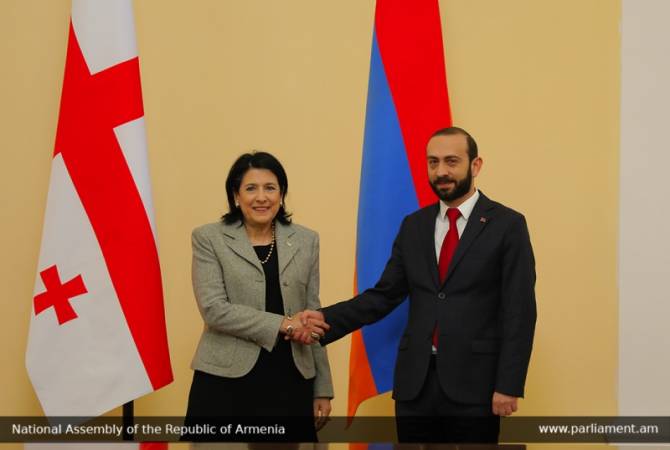 
YEREVAN, MARCH 14, ARMENPRESS. Speaker of Parliament of Armenia Ararat Mirzoyan on March 14 received the delegation led by President of Georgia Salome Zourabichvili who arrived in Armenia on an official visit, the Parliament told Armenpress. The meeting was held in an extended format.

Welcoming the guests Speaker Mirzoyan expressed confidence that the representative visit of the Georgian President’s delegation can contribute to further deepening and strengthening the Armenian-Georgian friendly relations. He highlighted the traditional and unique ties of the brotherly peoples which are based on common history, cultural and spiritual values. The Speaker also emphasized the need to intensify the ties between the Armenian and Georgian parliaments, noting that a parliamentary friendship group will be formed soon.

Talking about the importance of mutual cooperation in inter-parliamentary platforms, Ararat Mirzoyan said the delegations always support each other in matters acceptable by both sides. In this context he stated that the delegations, in case of matters of different positions, should be guided by the principle of at least not harming one another.

Ararat Mirzoyan also touched upon the regional security issues. As for the Nagorno Karabakh conflict, the Speaker said the Armenian leadership supports the peaceful, negotiated settlement of the conflict within the OSCE Minsk Group Co-Chairmanship format, adding that Georgia, as an OSCE participating state, has joined the settlement in the Minsk Group format. “Therefore, we need to make efforts so that the balanced and neutral statements will serve as a guideline in all statements over Nagorno Karabakh”, Ararat Mirzoyan said.

In this regard the Speaker expressed its concern over the joint statement of the Turkish, Azerbaijani and Georgian foreign ministers made on October 29, 2018, which includes only one of the conflict settlement principles. The Speaker added that the Armenian public was also concerned over some formulations made by the Georgian President during the recent visit to Baku. In this sense the Speaker of Parliament considered unacceptable the generalized approaches for different conflicts.

In her turn the Georgian President positively assessed the role of the parliamentary diplomacy and also highlighted the importance of active cooperation and mutual visits between the legislative bodies of the two countries.

“It’s important that our stable relations continue developing regardless of the change of the political forces. We, as two neighbor states, must have close relations, and these relations should further deepen and expand”, Salome Zourabichvili said.

Commenting on the concerns voiced by Speaker Mirzoyan, the Georgian President presented her position, by also attaching importance to the exclusively peaceful settlement of regional conflicts in accordance with the norms of the international law. According to her, the conflicts in the region hinder the joint progress.

Ararat Mirzoyan said he is ready to host his Georgian counterpart in the near future.

At the end of the meeting the Georgian President left a note in the Parliament’s Honorary Guest Book.