Armenia, Georgia have great potential to be developed and strong countries: Official dinner served in honor of President Zourabichvili 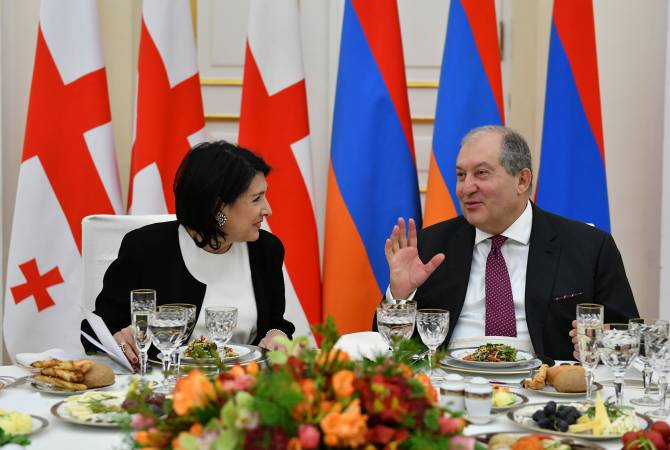 
YEREVAN, MARCH 14, ARMENPRESS. An official dinner was served on behalf of Armenia’s President Armen Sarkissian and spouse Nune Sarkissian Wednesday evening in honor of President of Georgia Salome Zourabichvili who arrived in Armenia on an official visit, the Presidential Office told Armenpress.

The Armenian President welcomed his Georgian counterpart and her delegation and stated:

“I am happy to host you in Armenia.

The friendship of Armenian and Georgian peoples has a centuries-old origins and a history of millennia.

During those centuries the two peoples have passed through huge experiments, but the common history, culture united us, and there are numerous such examples”, the President said, adding that time has showed that Armenia and Georgia had had a great history of friendship, but it will also show that both states have good and friendly future.

President Sarkissian said the rich cultural heritage of the two peoples has a special place in the bilateral relations. “Last month we celebrated the 150th birthday anniversary of renowned Armenian poet Hovhannes Tumanyan. I want to state that Tumanyan was also honored in Tbilisi, and this is not a coincidence. Tumanyan’s human and poetic trace is not only in Dsegh, Yerevan and Armenia, but also in Tbilisi and Georgia.

Dear Mrs. President, I am sure you know that Tumanyan had a specific sympathy towards Georgia and its people”, Armen Sarkissian said, wishing peace, prosperity and all the best to the Georgian people.

“Let the Armenian-Georgian friendship remain uninterrupted. Let peace and welfare always spread in Armenia and Georgia and between our two peoples”, he said.

I think that in addition to further deepening the cultural ties, it is also necessary to expand the cooperation spectrum. We have a great potential to be developed and strong states. Supporting each other on this path will bring great success”.