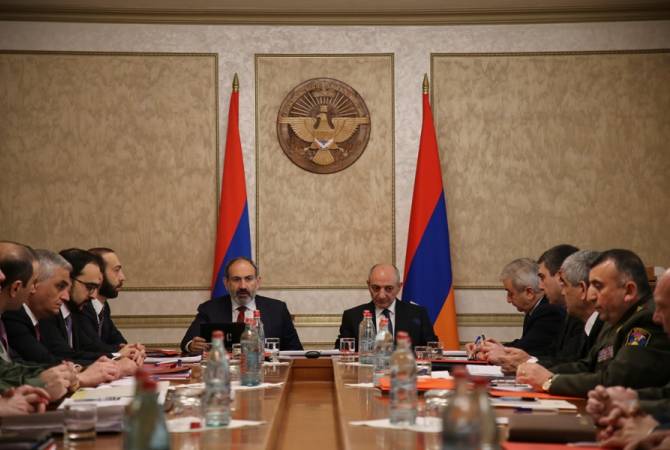 The main topic of the agenda was the joint assessment of the current situation of the NK conflict peaceful settlement and outlining of coordinated actions.

Pashinyan and Sahakyan delivered remarks before discussing the agenda issues.

“Allow me to welcome the joint session of the security councils of the Republic of Armenia and the Republic of Artsakh, which is an unprecedented event during the entire period of existence of our republics. This event has a very symbolic and on the other hand very concrete reason. This means that the relations between Armenia and Artsakh are entering a new qualitative phase. As to what other manifestations this phase can have in the future is perhaps among the important topic of our today’s discussion”, Pashinyan said.

This is my first visit to Artsakh after the 2018 December 9 parliamentary election in Armenia, and I would like to emphasize that the My Step Alliance has received a strong mandate from the people in the parliamentary election for increasing the level of the topic matter of the Republic of Artsakh and making steps aimed at the involvement of Artsakh, as the main party to the conflict, in the NK conflict settlement process. These are points that had a key significance in the My Step Alliance’s campaigning message.

The Government of Armenia and myself, as the prime minister who received the vote of confidence of the people, will therefore make coherent steps in this direction, and this issue remains one of the important points of our discussions with Azerbaijani President Ilham Aliyev and the OSCE Minsk Group Co-Chairs. I find it noteworthy that Artsakh’s involvement in the negotiations process isn’t a whim for us, and not even a precondition, it is a simple recording of a fact that Artsakh’s involvement has key importance in the settlement of the NK conflict.

The international community, in person of the OSCE Minsk Group Co-Chairmanship, is also represented in the negotiations process. This all, of course, is good and extremely important, and we highly appreciate the efforts that the OSCE Minsk Group Co-Chairing countries have contributed and continue contributing in the settlement process. But the main issue is the following – who is representing the people of Artsakh, like they say in certain cases the Armenians of Karabakh in the negotiations process?

I’ve numerously said that the Prime Minister of Armenia cannot implement such authority due to the simple fact that the people of Artsakh do not vote in elections in Armenia and thus the Prime Minister of Armenia isn’t included in the circle of persons authorized to represent the people of Artsakh. And this isn’t a matter of whim or precondition, this is a matter of simple legitimacy, and legitimacy is a key factor of modern relations, not only domestic but intergovernmental and international relations.

By the way, all the commentaries claiming that this way the Republic of Armenia or the Prime Minister is shaking off responsibility and placing it on the government or people of Artsakh are absurd. In order not to leave space for any manipulation I find it noteworthy to emphasize that the Republic of Armenia has been, is and will remain the number one guarantor of Artsakh’s security and will continue its involvement in the peace process.

Bako Sahakyan underscored that the unconditional implementation of the 1994-1995 cease-fire trilateral agreements constituted the basis of a conducive to peace atmosphere, making an important input to the advancement of the peace process. "Artsakh is ready to continue its constructive contribution to the process of establishing lasting and durable peace in the region", noted Bako Sahakyan.