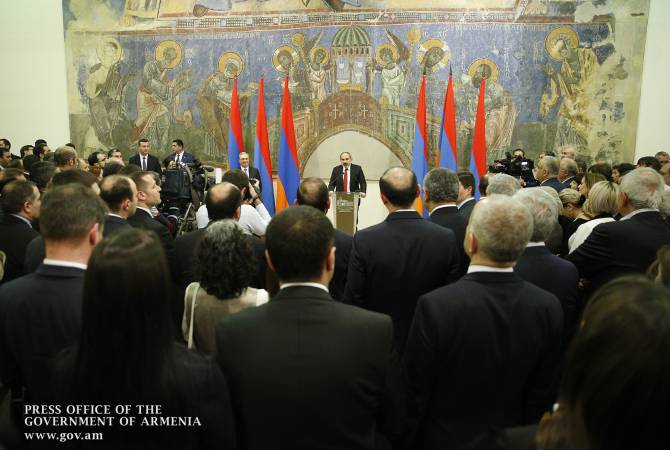 
YEREVAN, MARCH 7, ARMENPRESS. Prime Minister of Armenia Nikol Pashinyan attended the reception dedicated to the Day of Diplomat at the National Gallery of Armenia.

Congratulating the diplomats on their holiday, Nikol Pashinyan said,

“Honorable Speaker of the National Assembly,

I congratulate you on the Day of Diplomat. This is a really important day for our country. Let me record that our diplomatic system meets this day in totally different conditions and situation. Fortunately, today our diplomats throughout the world do not need to spend long days and time to give explanations in different countries about to what extent the elections were falsified , and to what extent the elections will not be falsified during the next elections, or how many steps these elections were a progress and how many steps they were a reverse, or who, whom and where shot dead and for what. I think this is an important change that reflects the nature of the non-violent, velvet and people’s revolution. And I hope that this change will not be taken as a reason for working less, but vice the versa, it will be an inspiration for working more, more encouraged, with greater enthusiasm, because today the Republkic of Armenia has something to present to the world and today different parts of the world have a greater willingness to listen to the Republic of Armenia”.

PM Pashinyan thanked all the diplomats for their service, particularly those working in unstable regions with security risks. “Particularly, our Consulate General in Aleppo deserves our deepest respect for its the uninterrupted work, despite the fact that the building was bombed. The same can be said about our Embassy in Baghdad”, PM Pashinyan said.

Addressing to FM Zohrab Mnatsakanyan, Nikol Pashinyan said, “Mr. Mnatsakanyan, I wish you success, as it is usually said, in leading this difficult and complex staff. I also want to say words of appreciation to all the foreign minister of the 3rd Republic of Armenia for their efforts to accomplish the diplomatic system of Armenia”, Nikol Pashinyan concluded.