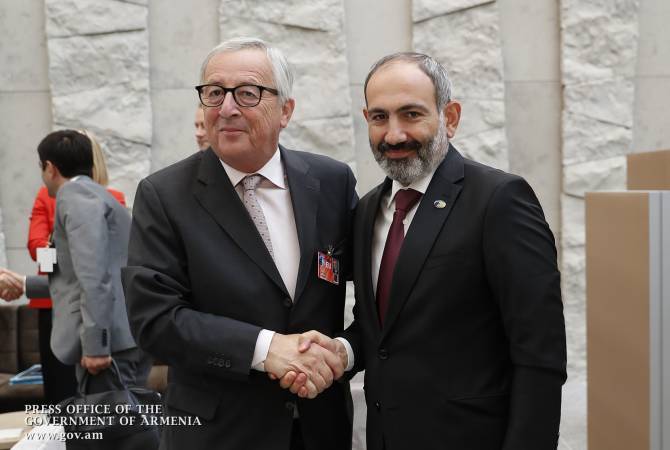 “I have expressed our gratitude for the European Union’s balanced position on the Nagorno Karabakh conflict which supports the OSCE Minsk Group Co-Chairs, their position and efforts”, the Armenian PM said during a joint press conference with Jean-Claude Juncker and Commissioner for European Neighbourhood Policy and Enlargement Negotiations Johannes Hahn, adding that they have also touched upon the regional and international developments.

Talking about the Armenia-EU partnership, Pashinyan assessed his discussions held in Brussels as very productive in the context of the current partnership, in particular, the recent irreversible democratic changes in Armenia. “I once again emphasized the commitment of the new leadership of Armenia to strengthen the rule of law, promote democracy, eradicate corruption, as well as to fight against artificial monopolies, economic sponsorship and oligarchy in order to ensure the complete and free exercise of fundamental rights in Armenia”, the PM noted.

Pashinyan stated that it’s obvious that in order to make democracy viable Armenia needs to have strong and viable economy, and therefore the next step of the Armenian authorities is to deepen democracy through revolutionary changes and economic reforms. “This is one of our main goals and the pillar of our government’s Action Plan”, Nikol Pashinyan said.

He highlighted that the EU is the key trade and the greatest donor partners of Armenia and added that during the talks he introduced the EC President on the government’s vision and priorities. “Today’s visit and our discussions with the EU leaders show that we both are interested and ready to deepen our partnership”, he said.

He also highlighted the fact that he has a common perception with President Juncker that Armenia and the EU should continue and expand the cooperation to solve the aforementioned issues and implement the ambitious reform agenda of the Armenian government by the EU’s technical and financial assistance which will allow the Armenian government to accelerate the reforms and make them more effective. “In this sense the Armenia-EU Comprehensive and Enhanced Partnership Agreement (CEPA) is an important platform. The Armenian leadership with many occasions has showed its dedication and political will for the effective implementation of this document. This Agreement and the road map are important. During our meeting we have also discussed the ways of accelerating the CEPA ratification process by the EU member states which will enable to completely use its opportunities”, the Armenian PM said.

Pashinyan once again highlighted the Armenia-EU high-level political dialogue, the atmosphere of mutual understanding and partnership which is a priority in the bilateral ties.

European Commission President Jean-Claude Juncker congratulated Pashinyan on the victory of his political force in the 2018 December parliamentary elections. “The Prime Minister has put the reforms and the cooperation with the EU on the focus of his agenda, and we welcome this. The more Armenia carries out reforms, the more we will assist it both financially and politically”, he said, adding that the EU will provide 176 million Euro assistance to Armenia in 2017-2020 for human rights and fundamental reforms.

The European Commission President stated that he has repeatedly emphasized that a lot of works must be done in anti-corruption and judicial reforms sectors. “We know that the PM seriously reacts to these goals and is inclined to work on this direction”, Juncker said, adding that Armenia and the EU are moving forward jointly. “We are allies and are ready to assist Armenia as much as it wants us to help”, he added.