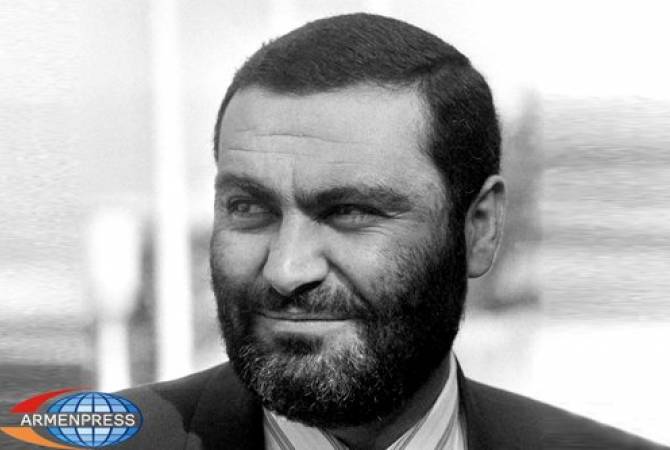 
YEREVAN, MARCH 5, ARMENPRESS. “I am a happy man, because I had the honor to realize all the dreams that we were cherishing” – said Prime Minister Vazgen Sargsyan, but his journey was cut short when at the age of 40 he was killed in the October 27 1999 Armenian parliament shooting, a terrorist attack that shocked the country.

7 other government officials, including Speaker of Parliament Karen Demirchyan, were also killed in the attack.

Today, March 5, is the birthday of Vazgen Sargsyan. He would have turned 60 years old.

If the attack didn’t happen, National Hero of Armenia, Sparapet Vazgen Sargsyan would celebrate his birthday today with his family, although they say he never really liked birthday parties for himself.

“We would gather and celebrate at home, but he wouldn’t be there. We would arrive when we had already finished and were just sitting there. We were the ones eating, drinking, and we were also the ones blowing out the candles on the cake, congratulating without him even being there. He never liked celebrating his own birthday,” Sargsyan’s niece Yeranuhi Musikyan tells Hayastani Hanrapetutyun newspaper. Musikyan is currently working at the Vazgen Sargsyan Museum.

But he did celebrate the coming of the spring.

“Together with 5-6 friends we would go down to the Ashtarak Gorge with Vazgen to mark the beginning of spring, with lavash, cheese and greens. And at this table eating meat was banned,” Sargsyan’s friend, former military prosecutor Gagik Jhangiryan recalls, adding that the prime minister was a man of nature also with this.

He loved nature, especially the nature of his hometown. He loved everything about his village, the land, the water, his street, the children. Mrs. Yeranuhi recalls how one time Vazgen Sargsyan was asked what he misses most about his hometown. He answered that he even misses the village’s mosquitoes.

During the times when Vazgen Sargsyan worked at the Garun magazine in Yerevan, he would travel all the way from his village to the capital city every morning and evening, despite having relatives who offered him their flat – this is how much attached he was to his home. As far as responsibility, he was always on time at the office, even when his colleagues from Yerevan were late.

Sargsyan’s family says he had a high sense of responsibility from early childhood.

“Even as a child he never liked defeat. His team in neighborhood games must have won every time, then only he would come home, regardless what time it was. Football was his passion. He would play very very often, and at the same time he got excellent grades at school”, Mrs. Yeranuhi says. Vazgen Sargsyan’s mother was a teacher at the same school that he attended, a fact he didn’t like much. “He would say, move me to another school. Others will think I am getting high grades because I’m a teacher’s son”.

Vazgen Sargsyan was Mrs. Tsovinar’s first grandson. She would often say “My Napoleon Baby” to Vazgen Sargsyan, when he was very little. And grandma’s inner feeling proved to be right.

“Unfortunately he is gone, if he was with us, we would have been in an entirely different situation, both the country and the military, and generally the spirit of the people, the social, material condition of the people…..It is difficult to describe Vazgen, it is extremely difficult,” Jhangiryan says.

Vazgen Sargsyan loved life, songs and friendship – this is how former official and Sargsyan’s friend Vahan Shirkhanyan describes him.  According to Shirkhanyan, the prime minister very well knew that the people love, accept and respect him. “He knew it very well, and was very relaxed about his [personal] security. He could never even assume that someone from the people would come out against him and do something like this,” he said, referring to Sargsyan’s assassination.

“We must build the powerful Armenia that Vazgen dreamt of with our daily work. Perhaps this will be the best gift and this must to some extent be obliging so that we pass this path every day. The symbol of the 60th anniversary of birth must be that the name of Vazgen Sargsyan is remembered not only in 60 years, 600 years, but 6000 years and more, eternally,” presidential advisor Tevan Poghosyan says. Poghosyan says he would have been extremely happy to have the chance to drink a toast on March 5 with Vazgen Sargsyan on his birthday.

By the way, an occasion for toasts for Vazgen Sargsyan was the process of preparing ghaurma, a tradiotnal Armenian dish with beef. Mrs. Yeranuhi says they had a family tradition of cooking dishes for the winter season. “And when we would cook ghaurma, Vazgen was unconditionally present in order to taste it with pickles, wine and lavash. He liked all the rituals”.

He loved everything Armenian, the Armenian of everything. Principally, he never ate bananas. “Will a people having apricots eat a banana?” he once said.

The wedding ring that Vazgen Sargsyan’s grandmother saved for his chosen one remained without an owner, as the prime minister and famed military commander never married. The ring is now on display at the Vazgen Sargsyan House-Museum.