‘Problems in Armenia emerged from point when people’s political will has been distorted’: Pashinyan receives Public Council members 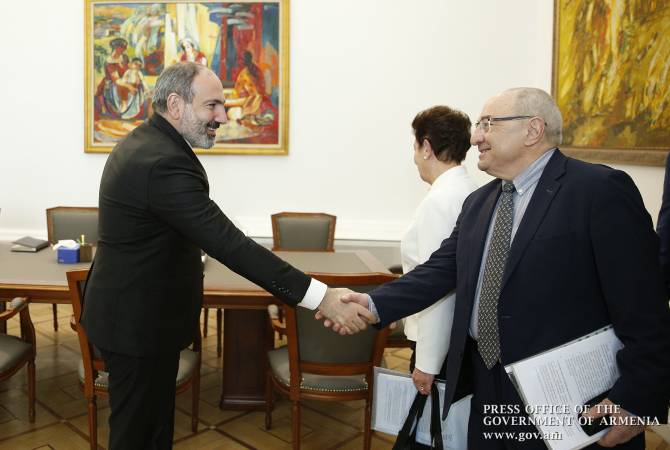 Welcoming the guests, the PM first of all touched upon his message addressed today on the occasion of the 2008 March 1 events.

“I am happy to see you and discuss with you issues relating to the activity of the Public Council. Earlier today I have addressed a message on the 2008 March 1 events and as the PM apologized on behalf of the state for all the electoral frauds, political persecutions that have taken place in the history of the Third Republic.

I attach great importance to this message and expression of the position at the state level because we need to have strength and say that the problems in Armenia, if not by 100%, but at least by 90%, emerged from the point when the political will of its people has been distorted.

Unfortunately, in the history of the Third Republic, besides perhaps the first presidential election and one can make reservations over the 1999 parliamentary elections, although their results have been disputed in the Constitutional Court, for the remaining cases my political assessment is that the results of the elections were either falsified, or no opportunities have been created for the expression of the people’s free will, or more precisely, everything has been done to distort the free expression of will of the people.

I want to note and I hope that we have a public consent, according to which the page of electoral frauds, political persecutions, corruption, illegalities, arbitrariness, obscenity, human rights violation is closed, and there will be no return to these phenomena. In any case, I consider this the most important mission of our government and mine as the Prime Minister of Armenia.

I am confident that we will remain very determined and committed within the service of this mission no matter what will be the rating of our force at any election and what percent of the citizens will vote in favor of our political force.

This is just an introduction, but I know that our meeting is not linked with these problems, I suppose today we will have a discussion on a number of related issues. Thank you”, the PM said.

In his turn Vazgen Manukyan stated: “Thank you Mr. Prime Minister. We really need to talk about the Public Council, I would like to refer to what you have said. It would be desirable if March 1 becomes a symbol, a solidarity day, rather than a day of fighting against each other. A page has been closed by those events, and from now we must remember March 1 not as a day of fighting against one another, but a day where we have learned a lesson from our history and have made it a solidarity day for all our people.

All those who have certain guilt, a criminal crime, must be punished, that’s not the matter, but I perceive March 1 as a day of solidarity, unity and learning a lesson.

As for the Public Council, I think that it’s a very important structure, it’s not a coincidence that similar bodies also exist in 70 countries. And now there are new opportunities because it has become a constitutional body. The Public Council has an interesting staff with a very useful people who in some sense stand above politics and are devoted to the state, do not represent any political party, do not have political ambitions, but have ambitions to develop the country, to create and become an important link ensuring the constant communication between the society and the leadership”.

During the meeting Vazgen Manukyan introduced the PM on the works carried out for the formation of the Public Council and the expected steps for the Council’s future activities.