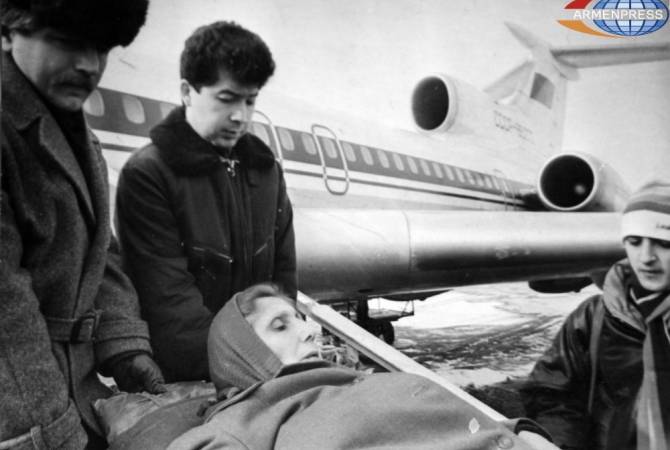 
YEREVAN, FEBRUARY 28, ARMENPRESS. The massacre of the Armenian population of Sumgait on February 27-29, 1988, was a deliberate and planned crimecommitted by political, national and religious motives and conformed to the notion of genocide, ARMENPRESS reports this is stated in the statement of the Artsakh Union of Armenian Refugees from Azerbaijan.

“Mass pogroms and killings of the Armenian population took place in Sumgait on 27-29 February 1988, a few hundred kilometres away from Artsakh. According to official information published by the Azerbaijani authorities, who tried to conceal the scale of the crime in every possible way, 26 Armenians were killed, several hundred were injured and maimed as a result of the Sumgait massacre. However, according to eyewitness accounts, the real number of those killed and injured significantly exceeded the data presented by the Azerbaijani authorities. As it turned out later, the bodies of murdered Armenians were taken to different morgues in Baku and other towns.

The Azerbaijani authorities upon the silent agreement of the Soviet leadership tried to hide not only the scale, but also the real causes and motives of the committed crime. For this purpose, there has been no single overall investigation process, and the case was split into 80 episodes. Such an approach to the investigation of the Sumgait massacre and investigation management in general, deliberately excluded the search andidentification of the true organizers of this crime and bringing them to justice. As a result, most of the perpetrators received minor sentences and were released soon after.

There are facts indicating that the massacre of the Armenian population of Sumgait was a deliberate and pre-planned crime committed on political, national and religious grounds and falling under the definition of genocide. In particular:

The lack of a proper legal assessment of the mass crime committed on 27-29 February 1988 against the Armenian population of Sumgait, gave rise to a false sense of permissiveness among the Azerbaijani authorities. A few months later portraits of Sumgait murderers appeared at rallies in Baku with slogans "Long live the heroes of Sumgait!". Impunity has led to widespread terror against the Armenian population throughout Azerbaijan. As a result of the wave of Armenian pogroms that swept across the Azerbaijani SSR in 1988-1991, hundreds of Armenians were killed, tens of thousands were forcibly deported, and hundreds of thousands became refugees.

Today, against the backdrop of calls by international mediators to prepare societies for peace the issue of legal assessment and responsibility for crimes against humanity committed in the Azerbaijani SSR from 1988 to 1991 is becoming relevant. Obviously, the impunity of crimes against humanity, glorification and heroization of murderers ranging from Sumgait pogromists to Ramil Safarov, attempts to justify the grave crimes committed in Artsakh by Dilham Askerov and Shahbaz Guliyev and encouragement by the top leadership of Azerbaijan of servicemen who committed war crimes in April 2016 cannot serve as a basis for building peace”, reads the statement.