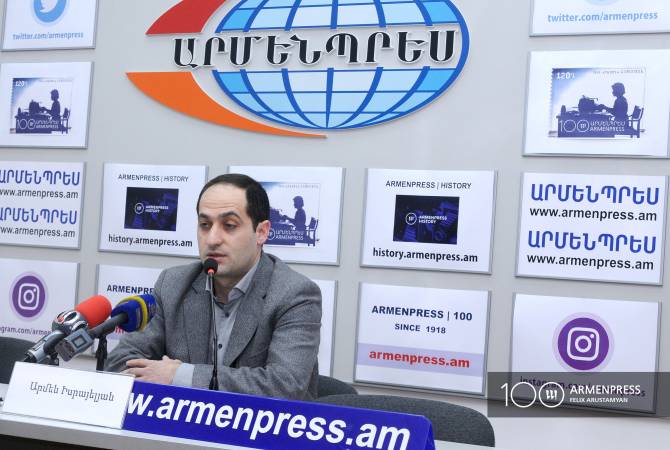 Pashinyan will travel to Iran on a visit on February 27. This will be the first visit of Pashinyan to the country.

“We have always highlighted Iran’s strategic significance for Armenia. In this context the bilateral cooperation must be rather important for both leaders. I think there will be a clarification of the political agenda, taking into account the Armenian revolution, the developments in Iran, the sanctions against it and other issues”, he said.

Israelyan noted that in terms of politics the Armenian-Iranian relations are on a quite high level, which isn’t reflected similarly in the economy. In 2015, when the Iran nuclear deal was signed, it was expected to boost economic relations with Armenia. But Israelyan argues that major economic projects did not happen and the trade turnover indicators continue being unsatisfactory.

“Meaning, we must be quite active because there are serious prospects for development in different sectors, energy, tourism, transportation, industry and others. The question is that Armenia, our economy and investment opportunities must be maximally presented to Iran’s society, businessmen. For a long time it seems that in Iran they very well know about this all, however, I assure you it isn’t like that. Daily work is required in this direction,” he said.

He highlighted that fact that Armenia has emphasized the modernization of infrastructures. According to him, as long as Armenia hasn’t done sufficient work in this direction, serious progress cannot be recorded in the economy.

Speaking about regional issues, Israelyan said that regarding the NK conflict the Armenian government has clearly announced its guidelines around which it is ready to move and advance policy.

“Here I think the Iranian side will be interested to hear these guidelines personally from the Armenian leader. On the other hand, it will be interesting for Armenia to hear out Iran’s stance regarding the Artsakh issue. Different politicians periodically make statements which are problematic for us. Certainly, these later get refuted by the Iranian foreign ministry, however it is important for Iran to announce on a high level what stance it has in the Artsakh issue”, he said.

The Iran-EEU free trade deal is expected to be ratified by member states of the organization in 2019, and Israelyan said economic benefits can be gained in the EEU circle also.

“Armenia can also gain benefits in the EU-Iran cooperation context. Despite the US sanctions, EU leading countries such as Germany, France and the UK, are inclined to continue economic cooperation with Iran. This was clearly spoken about recently during a conference in Warsaw by the EU High Commissioner for Foreign Policy and Security Affairs. Here, Armenia should also be the initiator by keeping issues regarding Iran in the agenda,” he said.