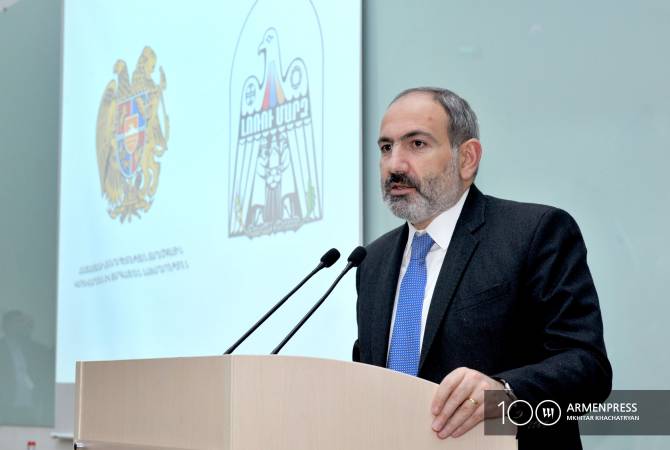 
YEREVAN, FEBRUARY 23, ARMENPRESS. The methodology of the economic revolution of Armenia is similar to the methodology of the political revolution, Pashinyan announced during the investment conference “My step for Lori Province”. The conference takes place at the technological center of Vanadzor. A number of investors with different investment projects, diplomats accredited in Armenia and Governors attended the conference.

'The main question that hangs in the air today is whether economic revolution can take place in the Republic of Armenia and whether the Government and the people achieve a result that is internationally assessed as an economic miracle. The answer to this question is obvious. The people that were able to achieve political miracle can achieve also economic miracle. The economic revolution is our key priority, but we have to understand its parameters – which are new jobs, the new level of income, the new level of welfare”, ARMENPRESS reports PM Pashinyan as saying, emphasizing that everything depends on each individual.

'And we want to encourage people and support him to create what is in the scope of his capacities. How will we encourage? Yes, including with our words. Unfortunately, in our reality people underestimate the power of words and its value, but as a people that was the first to adopt Christianity, we have to record that In the beginning was the word. Everything starts from the word and mind. But only with words? Of course, not. The next most important direction for us is the creation of opportunities for doing real business through regulations, exclusion if monopolies and corruption, legislative amendments. I want to record that our methodology of the economic revolution is similar to the methodology of the political revolution», the PM said.

According to him, the political revolution took place when each citizen of Armenia made a decision that he will close the streets on his own through which corruption and permissiveness flow.

'The economic revolution must be implemented by each citizen of the Republic of Armenia’, Pashinyan emphasized, adding that only courageous people can take the responsibility for an economic revolution, who are confident in their diligence, honesty, principles and know that they are winners by nature.