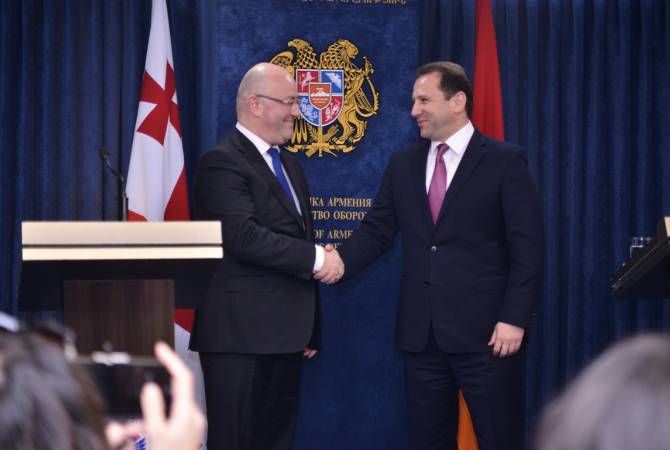 “We have discussed the bilateral relations of Armenia and Georgia in the defense sector. We have signed the 2019 military cooperation program between Armenia and Georgia which is being signed since 2010. This year the program is full of events relating to the defense field, such as military education, human rights, military medicine, as well as various measures for fighting corruption. Armenia and Georgia mutually perceive and respect each other’s preferences and believe in the idea of having a more secure and prosperous South Caucasus”, Davit Tonoyan said.

In his turn the Georgian defense minister said the Georgian side is ready to share its experience with the Armenian Armed Forces in a number of sectors.

“We had very productive discussions with the Armenian defense minister on issues relating to how to deepen the cooperation between our Armed Forces. The Georgian side is ready to share its experience with the Armenian side. The Georgian side successfully shares its experience with a number of NATO member states. I appreciate the participation of the Armenian servicemen in the Noble Partner 2018 held in Georgia under the auspices of NATO which included several partners”, Georgian defense minister Levan Izoria said.

The Georgian defense minister arrived in Armenia on an official visit on February 21.