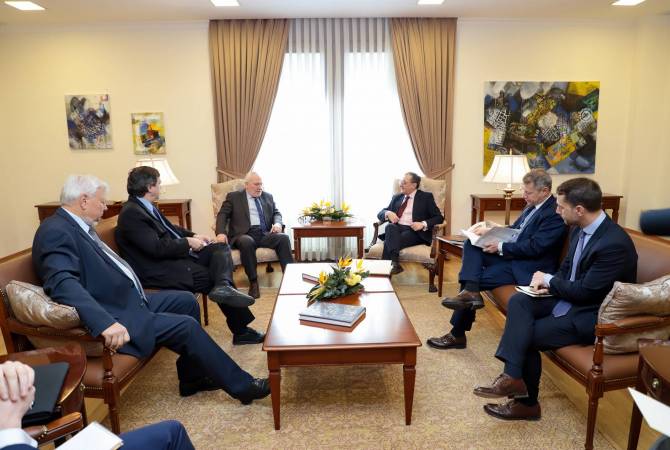 
YEREVAN, FEBRUARY 20, ARMENPRESS. Foreign Minister of Armenia Zohrab Mnatsakanyan met with the OSCE Minsk Group Co-chairs Igor Popov of the Russian Federation, Stéphane Visconti of France and Andrew Schofer of the United States of America, as well as Personal Representative of the OSCE Chairperson-in-Office Andrzej Kasprzyk on February 20.

As ARMENPRESS was informed from the press service of the MFA Armenia, the Armenian FM and the Co-chairs focused on the issues raised during the last meetings that took place in the sidelines of Nagorno Karabakh peace process. The Co-chairs were particularly interested in the details of Pashinyan-Aliyev meeting that took place in January in Davos.

Zohrab Mnatsakanyan reaffirmed the approaches and position of Armenia for an exclusively peaceful settlement of the conflict, highlighting the creation of a favorable atmosphere for it to happen.

The interlocutors exchanged views on future steps and meetings.