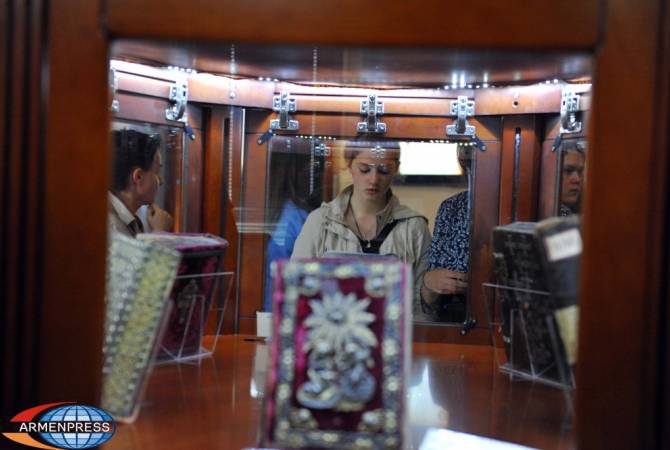 
YEREVAN, FEBRUARY 20, ARMENPRESS. The Matenadaran, the Mesrop Mashtots Institute of Ancient Manuscripts, is going to implement major programs in 2019 both in terms of book-publishing, scientific conferences and exhibitions.

Director of the Matenadaran Vahan Ter-Ghevondyan gave an interview to ARMENPRESS, talking about the publication of series of books.

“Among these book series, the “Matenagirk Hayots” (Armenian Classical Authors) has a special significance, which covers our entire bibliography from the first text written in Armenian up to the one written in late 18th century. In other words, our entire medieval heritage is collected in one place”, he said, adding that the publication of the series of books is a very important work. “All experts of Armenian studies across the world are looking forward to these volumes. This process is financed by the Calouste Gulbenkian Foundation, for which we express our gratitude”, he added.

The Director of the Institute also introduced the publication of “Mayr Tsutsak” (the Main Catalogue of Armenian Manuscripts), 9 volumes of which already exist, and this year it is planned to publish the 10th volume.

“The Armenian manuscripts of Matenadaran have a list, but it is brief. Currently we are publishing a very thorough, detailed list which requires great efforts, but it will provide much more comprehensive data to the researcher”, he said.

The Matenadaran also attaches great importance to the colophons of Armenian manuscripts which include information about a concrete manuscript when it was written, in which conditions and etc.

“These colophons are an important source and they have a great significance for the centuries when historiography was facing to say a sterile period. The historiography faced decline from the second half of the 14th century up to the early 17th century. When you have no historical texts, are unable to collect information about that century, these colophons become an exclusive source. Therefore, historians attach great importance to these”, Vahan Ter-Ghevondyan said. The last volume of these colophons has been published in 1988. Last year by the efforts of researcher Arpenik Ghazaryan a new volume has been released which gave a new breath to this valuable series of books. Another one is expected to be published in 2019.

In 2018 Matenadaran carried out a very active exhibition works both in Armenia and abroad. This year new exhibitions are expected in the Matenadaran, the exhibition of archival documents and that of ancient books will change.

Matenadaran continues to be supplemented with new manuscripts. It received over 50 new manuscripts in 2018, which included a major donation – 27 manuscripts, provided by the Pan-National Cultural Union. Last year the Institute also received interesting archival collections.

“This year it is planned to hold an international scientific conference dedicated to the 90th anniversary of second Director of the Matenadaran Sen Arevshatyan. He developed and pushed forward the Armenian medieval philosophy direction, and it would be better it this conference contributes to bringing new specialists on this field”, he added.