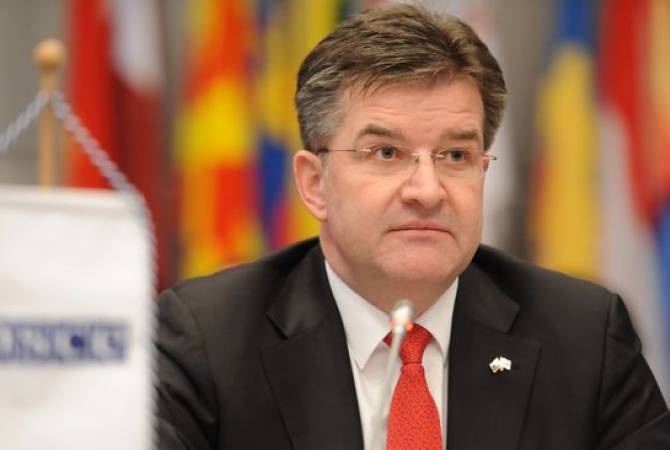 
YEREVAN, FEBRUARY 19, ARMENPRESS. Minister of Foreign and European Affairs of Slovakia, the OSCE Chairperson-in-Office Miroslav Lajčák will visit Armenia and Azerbaijan in March.

Lajčák plans to discuss issues concerning the NK conflict settlement during the visits, he said at a joint news conference with Russian FM Sergey Lavrov.

“I am planning to visit Yerevan and Baku, in the first half of March, to discuss these issues. I have an invitation from Armenia and Azerbaijan,” he said.

He noted that Slovakia is fully supporting the mediation efforts of the OSCE Minsk Group Co-Chairs.

Lajčák noted that a new situation exists in Armenia after the elections, with a government with strong mandate, and that certain expectations exist with it.

“Our goal is to support the Minsk Group Co-Chairs to use this new situation,” he said.

In turn, Lavrov emphasized that the Minsk Group Co-Chairing countries – Russia, France and the US, are closely cooperating with the OSCE.

“They’ve already met with the Armenian and Azerbaijani leaders, foreign ministers, new contacts are being prepared. Given the fact that the Armenian government has been formed quite recently, certainly, it will take some time in order to be clear to what extent and intensity the settlement process will be able to be developed at this stage”, Lavrov said.