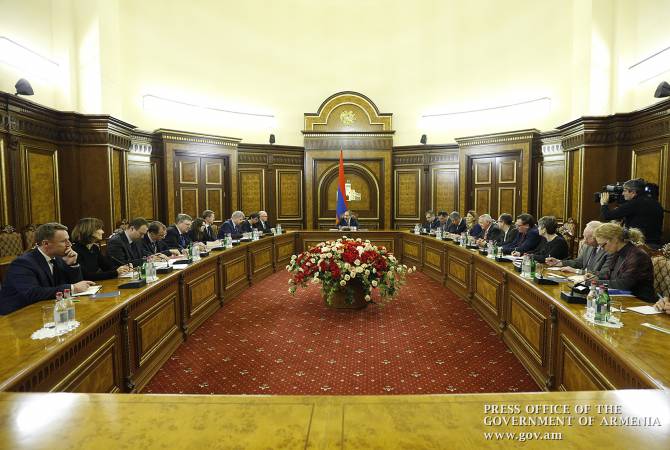 As ARMENPRESS was informed from the Office of the Prime Minister, in his opening remarks, Nikol Pashinyan said:
“I am glad to welcome such a representative delegation from the EU member states whose primary task is to promote the vision and the progress of the Eastern Partnership.

Partnership with the European Union is of an immense importance for Armenia – especially for the institution building and economic development of our country. The Comprehensive and Enhanced Partnership Agreement (CEPA) is the main instrument of our cooperation, and Armenia is fully committed to its implementation. This is a landmark strategic document, which provides effective mechanisms for advancing both our partnership with Europe and the reforms in our country.

We hope that the ratification of the Agreement will be carried out in a timely manner. I am grateful for those countries which have already completed it. But at the same time, taking this opportunity I would like to ask you to convey our request to your governments to expedite the ratification process.

As you may know, last year our country and society have undergone through tectonic transformations, which led to the triumph of true democracy. The Armenian society here in Armenia and in Diaspora has fully embraced and supported those developments.

Our Government aspires to strengthen human rights, achieve coherent democracy, good governance, the rule of law, independence of judiciary and level playing field for all political and economic actors. This makes us even closer to the values and aspirations that have been put at the heart of the Eastern Partnership.

The logical pinnacle of our revolution was the snap parliamentary elections held last December. I am proud that the international observers assessed the elections as completely consistent with OSCE standards, and hailed as democratic, free, fair and transparent. In fact, they were the best elections ever held in Armenia since the first years of our independence.

Having finalized the political transformation, our government is currently concentrated on the economic transition. We have to make an economic revolution. We have adopted ambitious reform agenda aimed at establishing a true competitive environment for doing business, improving and simplifying the regulatory framework, eliminating barriers to trade, and attracting foreign direct investment.

As one of our priorities we are currently making steps to promote technology and knowledge based economy.

Today, the technology sector is one of the driving forces of our economic growth. Information Technologies have huge potential for development in Armenia. They are becoming one of our main comparative advantages and could constitute the corner stone of our economy in the future.

In this regard I would like to inform you, that Armenia will host the 23rd World Congress on Information Technology, which will be held from October 6 to 9, 2019, in Yerevan.
Hundreds of business community members, academicians and government representatives from a few dozen countries will attend the event. Taking this opportunity, I would like to ask you to share this information with your respective governments to dispatch their representatives to this remarkable event.

Implementation of reforms is a difficult process requiring significant financial and intellectual resources. In this regard, the continuous EU financial and technical assistance is of critical importance for us. We highly appreciate it. However, to tell the truth, today we are expecting more support from the EU. We believe that it should conform with the remarkable democratic achievements registered in Armenia. Please convey to your capitals the message that enhanced EU assistance could accelerate the reforms undertaken in Armenia, and make them more robust and instrumental.

Visa Liberalization Dialogue is another important commitment. Armenia has been undertaking consistent steps towards the effective implementation of the Visa Facilitation and Readmission Agree¬ments. And, we hope that the EU Member States will duly evaluate our progress and develop the required Visa Liberalization Action Plan.

With regard to the Nagorno Karabakh, I would just like to inform you that yesterday, I met with the EU special representative for South Caucasus and the Crisis in Georgia Mr. Toivo Klaar, and had a detailed conversation over the conflict and my recent meetings with president Aliyev.

Here, I want to conclude my remarks just to leave more time for your questions. I am ready to answer to all your questions including those pertaining to the Nagorno-Karabakh issue.”

On behalf of the delegation, Special Envoy on Eastern Partnership at Austrian Federal Ministry for Europe, Integration and Foreign Affairs Dr. Thomas M. Buchsbaum stressed the importance of today’s meeting, which was an opportunity to discuss issues related to the Eastern Partnership program and the deepening of EU-Armenia cooperation.

“Mr. Pashinyan, representatives from 16 EU-member states have arrived in Armenia to get acquainted with your reform agenda, your vision of economic revolution and express their readiness to support Armenia, which is part of the Eastern Partnership program. We welcome the peaceful implementation of democratic changes in Armenia and the smooth transition to the parliamentary system of governance,” he said.

Dr. Thomas M. Buchsbaum welcomed the holding of parliamentary elections in Armenia in December last year, which fully complied with the standards of democratic elections and the results of which once again testified to the great public confidence in the Prime Minister of Armenia.

Speaking about the December 9 elections, Nikol Pashinyan stated, in part: “They proved to be the first-ever free, fair, transparent and democratic elections in the history of independent Armenia. Elections used to be rigged in Armenia before that. The chapter of fraudulent elections is closed forever, which is the reflection of our political will. Our agenda is to strengthen democracy and transform the economy.”

The Premier underscored that the economic revolution is supposed to create real opportunities for people, local and foreign investors, and the government is already implementing reforms to improve the applicable legislative and institutional framework, as well as to introduce new tools.

In response to questions about democracy in Armenia, Nikol Pashinyan emphasized: “Democracy is an inner conviction for us; it is a system of values to our society, not a foreign policy or a geopolitical choice.”

During the question-and-answer session, Prime Minister Pashinyan touched upon Armenia’s democratic challenges, the strengthening of democratic institutions, the fight against corruption, the final success of the reform process, women’s increased involvement in public life, the settlement of the Nagorno-Karabakh conflict, the development of EU-Armenia cooperation, the opportunities available to Armenia’s partners and a number of other issues of topical concern.