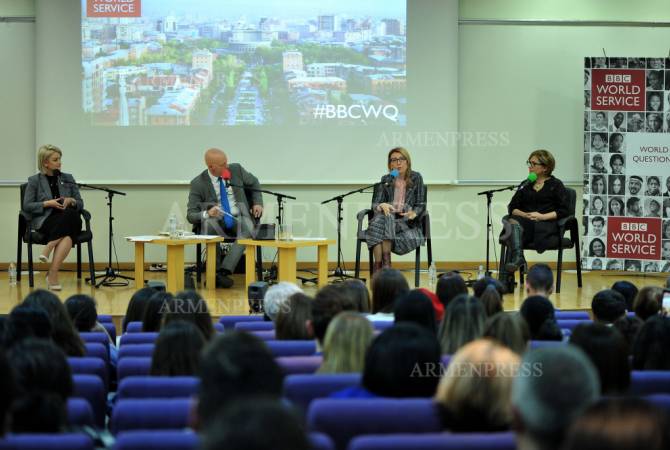 The audience asked questions which were about the revolution in Armenia that took place in 2018.

The first question was about the reasons of the velvet revolution.

According to Arevik Anapiosyan, the majority of the public needed changes and were looking forward to those changes.

“There were numerous objective reasons for the revolution. For example, the Constitutional changes that turned the government model of the country into parliamentary, while the power holding the majority made no positive change. We had already witnessed a number of movements, which finally led to revolution”, Arevik Anapiosyan said.

MP Tandilyan noted that the revolution was triggered by the fact that for years there were no free and transparent elections. “The members of the parliament did not represent the public position”, she said.

Director of MediaMax news agency Ara Tadevosyan noted that the revolution was a surprise for everyone, while the revolution came into reality with the help of the youth that had not lived in the Soviet Union.

“It was unexpected for me, for everyone, I think also for the leader of the revolution. No one could expect a revolution in Armenia”, he said.

“World Questions-Yerevan” program will be aired on February 9 at 23:00, Armenia time and at 16:00 on February 10. The recording will be available later on at www.bbc.com/worldserviceradio.