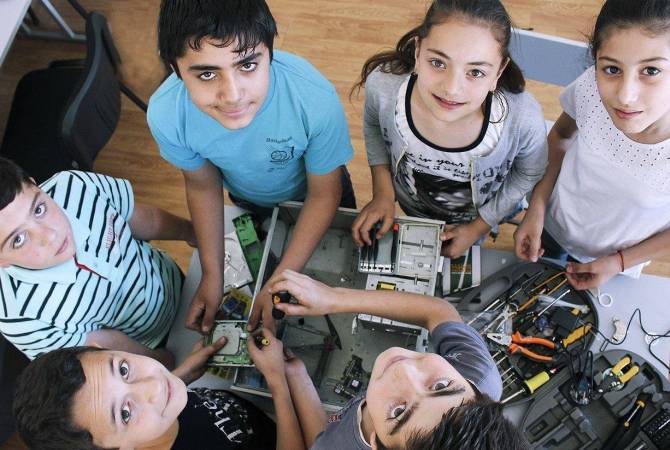 
YEREVAN, JANUARY 31, ARMENPRESS. The Union of Advanced Technology Enterprises (UATE) has initiated and is implementing for already several years the introduction of “Armath” engineering laboratories in the schools of Armenia and Artsakh. As of January, 2016, 252 engineering laboratories-groups, including nearly 6.300 children, are operating across Armenia. The “Armath” laboratories enable the students to master principles with mathematics and exact sciences, engineering, programming and robotics basics, project and manage UAVs.

UATE Executive Director Karen Vardanyan told Armenpress that this program is unprecedented. It launched in 2014 and gained a broad international recognition within a short period of time. “Armath” received awards at WITSA Global Excellence Award as a Sustainable Development program. A number of countries (India, Bangladesh, Ethiopia, Namibia, Mongolia and Spain) are negotiating with the UATE to introduce the Armath laboratories in their schools.

“”Armath” has become an Armenian high-technology educational brand which acquires great recognition all over the world. Today there is an international competition not only between the universities, specialists, but also schools. Armenia has acquired major experience in teaching engineering subjects at schools, and this is the main knowledge we are going to export as Armenia’s educational brand”, he said.

Karen Vardanyan noted that the “Armath” laboratories have proved their effectiveness in a short period of time. He presented the results of the analysis by the Grant Thornton according to which the net present cost of one group is 254 million drams.

“The internal rate of the profitability of one group is estimated 88%. In case of introduction in Armenia’s 1200 schools, the net present cost of all groups will comprise 298 million drams. Taking into account the direct effect of the operating groups only, the impact of the economic animator can be 2.3 times more. The research showed that 84% of the “Armath” graduates have been admitted to the university. 39% of them is also working in line with the study, 4% are only working. 45% of those employed are engaged in the programming sector, 12% have set up a startup, 29% are involved in other activities of IT sphere. The rest carry out engineering and technical works. 37% of the students is a potential employee of the IT sector after graduation”, he said.

The UATE, based on the Grant Thornton’s research, has developed a business plan which has calculated what economic impact the introduction of “Armath” in all, 1250 schools will have on the Republic, how much tax entries will be ensure, in how many years the “Armath” will bring the invested money back and etc.

“Summing up all this it becomes clear that the program will bring the money invested for it back within three years. The UATE calculations have also been checked by the Central Bank’s specialists who expressed their satisfaction and stated that there is even less calculation for “Armath’s” impact on the country’s GDP growth”, Karen Vardanyan said.

The UATE has applied to the government with the request to issue 5-6-year-old “Armath” securities worth 15 billion which will bring over 60 billion AMD benefit to the state.

“By this we are showing that education is the most profitable sector, and by this program we not only raise the level of education of the children, but also bring addition benefit to the state by ensuring Armenia’s international competitiveness. We hope that by the introduction of this program we will be able to restore the technological level and reputation Armenia had during the Soviet Union within 5-6 years and view Armenia as one of the most leading countries on the technology map”, Karen Vardanyan said.