Pashinyan meets with presidents of Switzerland, Rwanda, Ukraine in Davos 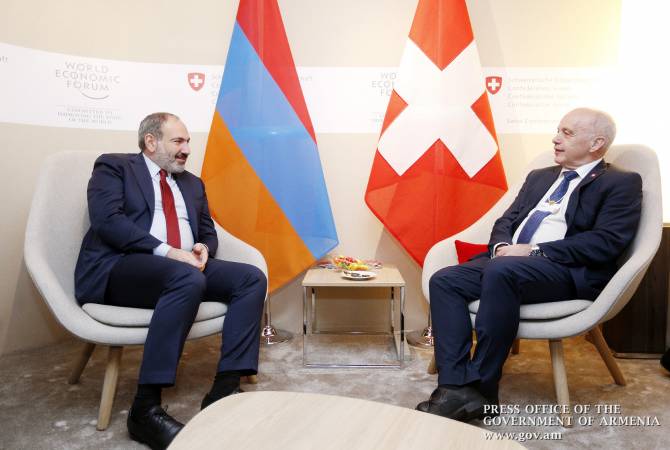 
YEREVAN, JANUARY 24, ARMENPRESS. Armenian Prime Minister Nikol Pashinyan continues having meetings with leaders of different countries and executives of companies in Davos within the framework of the ongoing World Economic Forum.

During a meeting with Swiss President Ueli Maurer, the sides praised the level of political relations between the countries and touched upon the development of economic partnership, Pashinyan’s office said.

The sides agreed to specify promising economic branches in terms of developing cooperation through diplomatic representatives, expressing hope that good opportunities for concrete investment programs will be created.

Pashinyan noted that he highly appreciates Switzerland’s experience in the development of democracy and that Armenia is interested in bilateral partnership in the direction of implementing reforms in different spheres. The Swiss president in turn said that his country is ready to deepen ties with the Armenian government in this direction.

During a meeting with Rwandan President Paul Kagame, Pashinyan discussed issues related to developing economic ties, namely the implementation of investment projects. The Rwandan President and the Armenian PM found the IT sector to be a promising sector for cooperation.

President Kagame noted that he knows about the success of the Armenian TUMO Center, and that Rwanda is interested in developing cooperation in this direction.

In turn, Pashinyan informed the president that in October 2019 Armenia will host the World Congress on Information Technology and invited Rwandan IT companies to participate.

The sides also touched upon cooperation within the La Francophonie. Kagame praised the organization’s latest summit in Yerevan and noted that it opened a new chapter in the relations between member states.