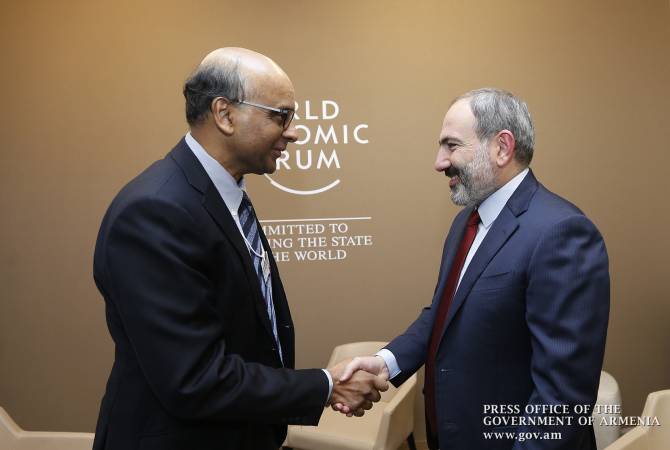 During the meeting Pashinyan said that Armenia is interested in the continuous expansion of cooperation with Singapore in different spheres, and that Singapore’s development experience is exemplary for Armenia.

The Armenian PM attached importance to deepening economic ties, the coherent development of commercial ties and partnership between businessmen. Pashinyan addressed the steps for the improvement of the business climate in Armenia and found it necessary to notify Singaporean businesses about the opportunities of making investments in Armenia.

The sides namely discussed the opportunities for exporting various Armenian products to Singapore, such as brandy, wine, beer, juice and other processed goods.

Shanmugaratnam noted that Singapore’s government is also attaching importance to developing cooperation with Armenia, taking into account the recent positive changes in the country.

He conveyed the Prime Minister’s invitation to Pashinyan to visit Singapore, noting that the visit may boost bilateral partnership in different directions.

Shanmugaratnam added that Armenians are known in Singapore as exemplary citizens and have high reputation among Singaporeans.

Singapore’s Deputy PM said he will present the business circles of his country the opportunities of investing in Armenia. At the same time, he found the Armenian government’s anti-corruption, business climate improvement and modernization of administration system to be ambitious.

Pashinyan said that Armenia will soon host the World Congress on Information Technology in October, and highlighted the participation of Singapore’s IT companies in the event.