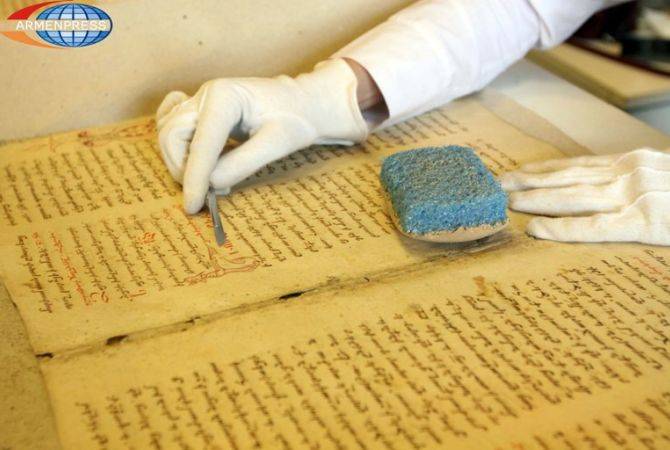 
YEREVAN, JANUARY 24, ARMENPRESS. Manuscripts that have been damaged during recent years in Middle Eastern countries will be restored with the assistance of Armenian experts, according to Matenadaran Director Vahan Ter-Ghevondyan.

Matenadaran, officially the Mesrop Mashtots Institute of Ancient Manuscripts is a museum, repository of manuscripts, and a research institute in Yerevan, Armenia.

“We are planning to carry out a new major project that has been initiated in 2018. With the assistance of UNESCO, nine experts on restoration of manuscripts arrived to Armenia from Lebanon and Syria, and Matenadaran experts organized a one-week training for raising qualification and deepening knowledge. Let me say that our colleagues were very pleased from the results. UNESCO found it to be one of the successful projects,” Ter-Ghevondyan told ARMENPRESS.

Based on the work, a larger program was initiated – In recent years, cultural values in Syria and Iraq have been greatly damaged, and Ter-Ghevondyan plans to make Matenadaran a regional center for restoration of such manuscripts.

The manuscripts will be brought to Armenia batch by batch, and will be returned after restoration.

“This, I believe, will have both cultural and political significance”, he said.

According to him, Armenian President Armen Sarkissian and UNESCO Director-General Audrey Azoulay have discussed this issue during their most recent meeting. “We are waiting for the final confirmation of the project”, Ter-Ghevondyan said.